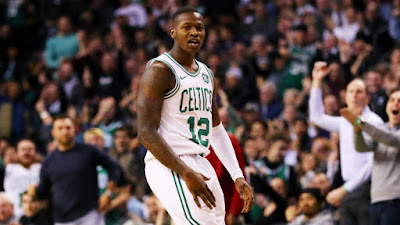 Terry Rozier and the Celtics did not reach an agreement on a contract before Monday's rookie extension deadline. Boston's back-up point guard will enter his fourth NBA season as a pending restricted free-agent.

According to A. Sherrod Blakely of NBC Sports Boston, Rozier turned down an offer from the Celtics reportedly worth about $12 million per-year and it was strictly a business decision.

Now that a deal can't be reached between both parties until next summer (barring a trade), Rozier, who's 24 years-old, says all he can really do is focus on this current Celtics season moving forward.

"I'm in a great situation," Rozier told NBC Sports Boston. "My team felt it wasn’t good for me to sign an extension right now. It opens my options a little bit, but I’m focused on what’s happening right now."

The Celtics will open the 2018-19 campaign against the Philadelphia 76ers on Tuesday night, the same team Boston knocked out of the playoffs in five-games last spring where Rozier averaged 19 points (41.5 percent from behind the arc), 7.2 rebounds and 4.4 assists per-game during that second round.


"We should have swept them but we let them win one game," said teammate Jayson Tatum to reporters after practice on Sunday.

Rozier in that series against the Sixers and throughout the Celtics entire postseason run proved he can be a srarter in this league.

With Kyrie Irving verbally committing to re-signing with the Celtics next July, Rozier remains positive about the future, as he continues to work and improve as a player.


"I feel like I’m one of those guys, I can make it work, whether it’s a little bit of space, a little bit of time,” Rozier said. "I’ve always been a team guy. For me, to be that way it has always opened up stuff for me, with me being about the team. I think it’ll all work out for me."

Rozier looks forward to pushing Irving to the limit in practice, as the Celtics have championship aspirations this season, and he'll be looking for minutes on such a deep roster.


"I’m gonna keep putting that pressure on Brad [Stevens] to play me," Rozier said, "and just have fun with it."