Kyrie Irving (20 points) shines in his return to TD Garden 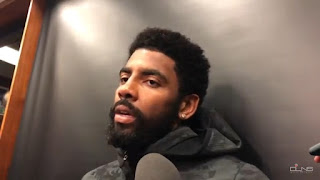 With only two exhibition games left before the start of the regular season, Brad Stevens gave his All-Star point guard an uptick in minutes against the Hornets on Sunday and Kyrie Irving took advantage of the opportunity.

He clocked in just under 29 minutes while he poured in 20 points on 7-of-14 shots to go with his four assists. Irving weaved through defender and earned trips to the free-throw line as he found his offensive rhythm early and often against Kemba Walker and the Hornets.

When he wasn't on the floor, he was vocal with his teammates from the bench and was actively involved in timeout huddles. It's obviously important for Irving to be as comfortable as possible come October 16 -- when the Celtics begin the regular season at TD Garden against the Sixers.

So far, he's looked like his old self since the start of training camp. Before Friday's preseason opener, Stevens set the minute-restriction for his starting unit at 20 minutes but gave Irving the green light on  Sunday.


"I looked at him in the third quarter and I said, 'Man, just let me play the rest of this,'" Irving told reporters in the locker room. "I definitely played a veteran's 27 [minutes] tonight, no good. So, you won't be seeing me on Tuesday.

"I got myself going and you'll see me again in Cleveland."

Jayson Tatum, who was the only starter who played less than 20 minutes, supplied 16 points but took more shots than any other player who hit the floor. He finished 6-of-16 as the second-year forward picked his spots carefully and wasn't shy in his offensive attack.

The Celtics will rest up for two days before taking on the Cavaliers at TD Garden on Tuesday.