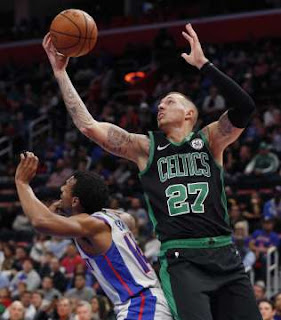 Don't let the numbers fool you, the Celtics' defense hadn't looked so great prior to Saturday night's game against the Pistons.

Although Boston entered Detroit with the league's best defensive efficiency rating (0.946), a five-game sample size doesn't always tell the whole story. Throughout the early-season, the Celtics have let up critical scoring runs in crucial moments.

Against the Knicks, the shooting of Tim Hardaway Jr. and Lance Thomas pushed the Celtics to the brink of losing a two-point lead in the final minutes of game and the Magic had their way in Boston in a game where the Celtics never led once nor could the stop the bleeding in the final frame. However, Saturday night was dramatically different.

The Celtics came out of the gate defending at a high level and it all started with containing Blake Griffin. The Pistons went to Griffin -- arguably the hottest player in the league prior to Saturday's contest, averaging a league-best 33.8 points a night -- early and often in the first quarter but he came up short every single time. The Celtics coerced Griffin into committing a pair of turnovers in the opening minutes and limited him to 0-for-7 from the floor.

It was a recipe for success for the Celtics Saturday because it not only led to Boston slowing the Pistons' focal point in Griffin but it also triggered the Celtics' second unit. The defensive efficiency rattled the Pistons and catapulted Boston's offense.

They grabbed a 22-point lead at the half and by the early fourth quarter the deficit was too steep for Detroit to keep its starters in, thanks to the bench that combined for 62 points. The Celtics showed off the depth of their roster in this one as the second unit -- aka BWA -- stepped up in a big way.

Marcus Morris tallied 18 points, 8 rebounds and Daniel Theis finished with 17 points and 8 boards. To put into perspective just how effective the reserves were, Kyrie Irving (3), Al Horford (4) and Jayson Tatum (6) combined for 13 points and the Celtics still cruised to a 109-89 win, handing Detroit its first loss of the regular season.

Jaylen Brown's 19 points led the starters alongside Gordon Hayward's 15 points and 5 rebounds. Andre Drummond led the Pistons with 10 points, 8 rebounds and Stanley Johnson scored 13 of his 16 points in the first half.

Detroit shot 37.1 percent from the floor, including 7-of-37 from deep -- where they attempted to shoot their way back and trim a 20-point advantage. But the Celtics held on tight.

The Pistons will get their chance to avenge their loss Tuesday night when these two teams face off again at TD Garden.

Celtics bench: 62 points
Celtics defense: Held the Pistons to 37.1 percent from the floor, including 7-of-37 from deep. They also held Griffin to 7 points on 2-of-13 from the field.