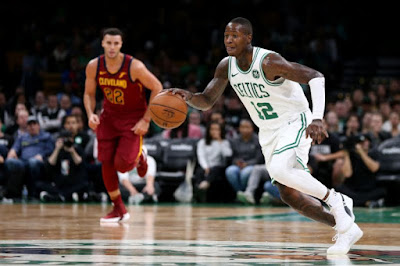 According to Danny Ainge, the Celtics are still discussing a possible contract extension with back-up guard Terry Rozier.

Ainge, the Celtics president of basketball operations, confirmed Thursday morning during his weekly appearance on Toucher & Rich, that talks with Rozier are ongoing ahead of the October 15 deadline.


Danny Ainge confirmed on our show that the Celtics and Terry Rozier have been discussing a contract extension. He also stated that if no progress was made by October 15th, discussions will be tabled for the time being. #Celtics
— Toucher and Rich (@Toucherandrich) October 11, 2018


The Celtics are not known to give out rookie extensions, as they usually wait it out and prefer to match restricted free agent offer sheets instead. Rozier is a unique case.

The Celtics might look to lock-up the reserve guard long-term before the market is set next summer and Ainge might not be able to match certain offers, especially if Irving (verbal agreement) signs a new deal to remain in Boston or decides to head elsewhere. But it's unlikely something gets done before Monday's rookie extension deadline.

Either way, Rozier is a threat on both ends of the floor and is going to get paid next offseason, unlike Marcus Smart, who's offensive skills are up and down, but the Celtics were still able to obtain him in a limited free agent market this past July.


"By signing an extension now, Rozier would almost certainly be sacrificing money and would do so for a team that cannot guarantee him the sort of role he undoubtedly desires moving forward," said NBC Sports Boston's Chris Forsberg in a recent report. "The Celtics are set to commit roughly $45 million to Irving and Smart, all while a potential big-money deal looms further down the road for current starting two-guard Jaylen Brown."

It remains to be seen if the Celtics will push to sign Rozier or just wait and move him before the NBA trade deadline.

We shall stay tuned.