Baynes returns to the lineup, Robert Williams remains waiting in the wings 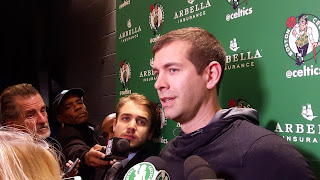 With two weeks of the NBA campaign in the books, Brad Stevens and the Celtics have already dealt with a couple of injuries to their roster.

After losing Aron Baynes (right hamstring) last week, the news of Daniel Theis' injury broke prior to Tuesday's rematch against the Pistons, only days removed from one of the best outings from any Celtics player this season. Theis' impressive performance (17 points, 8 rebounds) will be his last for quite some time as he works his way back to the court.

In the meantime, Baynes will make his return Tuesday night against the Pistons and with Baynes back into the fold, it doesn't seem like Celtics head coach Brad Stevens will be digging deep into his bench in order to make up for the loss of his second-year big. Theis' 12 minutes per will mostly be divided between rotation guys like All-Star Al Horford and Baynes.

While Celtics rookie Robert Williams has demonstrated strong potential -- especially on the defensive end of the floor -- Stevens reminded reporters before Tuesday night's game that Horford and Baynes will be remain as the main beneficiaries of the minutes left behind by Theis.


"We got a lot of good players and certainly at that position," Stevens said. "I don't see him [Williams] and Baynes will play much together. He can certainly play with Al [Horford] some as Al shifts to the four, Baynes can play with Al some but then again that knocks somebody else out or somebody's minutes out."

Barring any injuries to the front court, Williams will have to wait his turn and seize moments where some playing time could be available for the young rookie. Still, Stevens is happy with the progress he's seen from his rookie and believes he could carve out a role for his team at some point towards the ladder half of the season.


"As those times come he needs to stay the course and take advantage of those opportunities," Stevens said. We're thrilled with the progress he's made and we do think as time goes on he can really help us. He's got a great attitude about everything and I think he's recognized, I think he's learned a lot from Al and Baynes and Daniel [Theis]. But as you know, it can all change. He could be playing a lot by next week, knock on wood. Hopefully we have all of our bodies but you never know in the NBA."