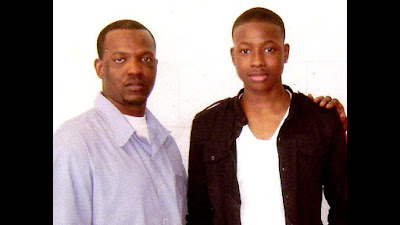 While Saturday's preseason finale between the Celtics and Cavs may not hold a lot of weight for most players, it's going to mean the world to Terry Rozier.

That's because it will be the first time he's ever played in front of his father. Terry Rozier Sr., who has spent 23 of the last 25 years in prison, was released this past summer following a 15-year prison sentence.

Rozier waited patiently outside of Ohio's Trumbull Correctional Institute for his father's release before taking him to the mall to get clothes, to the cemetery to visit Rozier's grandmother, and finally to Rozier's Sr.'s new home that his son bought for him, located in a Youngstown suburb. Saturday's preseason game against the Cavs at Quicken Loans Area will be the first time Rozier Sr. has seen his son play in-person since the days he taught him how to play back when little Terry was only eight years old.


"This is emotional," Rozier Sr. said. "I can't wait for Saturday, the first time ever. A lot of people think I'm so emotional when I talk about it. I've been waiting a long time to come home and watch my son." [Boston Herald]

From inside the walls of prison, Rozier Sr. watched his son emerge from a college standout at Louisville to a prominent Celtics player, who helped lead his team to one win away from the NBA Finals last season. Now reunited with his son, the two can't wait to catch up on lost time.

The point guard's father has settled into his new home and is currently working for a steel mill cleaning company located in Youngstown, Ohio. They plan to reconnect when the Celtics head to Cleveland for Saturday's game, and have already made plans for Rozier Sr. to head up to Boston, under the conditions of his probation, after Oct. 24.


"It's my father, just happy he gets another chance at life, and that he knows I'm here for him," Rozier said. "It's not like you're out of jail and I'm going to put a million dollars in your hands or anything like that, but I'm happy he's here and I want that relationship back.

"It's crazy every time I see him call, it means he's out. It's just crazy."