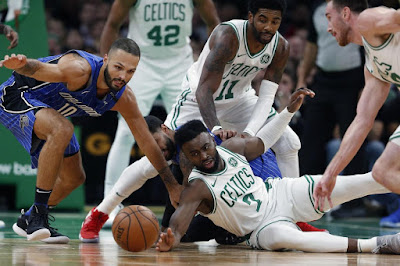 The Celtics are quickly finding out what it truly means when you're an early favorite to win the Eastern Conference.

It means when you take on conference bottom feeders, you're getting the absolute best from those respective teams, and on some nights those are the squads that are going to surprise you the most. It's what comes with the territory when you're projected to represent the Eastern Conference in the NBA Finals.

And Monday night at TD Garden was one of those nights for Boston. The Celtics, returning to TD Garden from a back-to-back road swing that ended in New York Saturday night, faced a Magic team that led Boston for all 48 minutes of the game.

The Celtics had two golden opportunities to send the game into overtime but fell short in the final seconds as the Magic sealed a 93-90 win. With 7.8 seconds left, Kyrie Irving missed a corner trey out of a Brad Stevens timeout, which was followed by a an offensive rebound pulled down by Al Horford and a Gordon Hayward miss from the right elbow behind the arc that rolled right off the rim.

For three quarters, Orlando's lead teetered between double-digit territory and a two-possession game but the Magic never surrendered a single lead throughout the night. Instead, the Magic strung together defensive stops and countered the Celtics with a blend of outside shooting and points in the paint.


"We're figuring it out. It's a day-to-day thing and it's us understanding what we all need to do to be successful and it takes time," Horford said after the game. "There are times that we look really good, times that we don't look good at all and we just have to keep learning and hopefully winning and learning as opposed to losing. But sometimes these type of things have to happen for the group to react."

Irving woke up from a first-half slump and poured in a team-high 22 points and pulled down 8 rebounds, while Horford contributed 15 points but it wasn't enough to overcome their shortcomings on both ends of the floor, especially 9-for-40 shooting on 3-pointers.

Celtics will head back on the road and take on the Thunder Thursday night in Oklahoma City.