Celtics 105 - Sixers 87: Philly still has no solution for Jayson Tatum 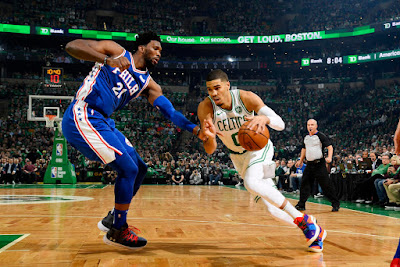 Kyrie Irving went scoreless in the first half, Jaylen Brown couldn't find his shot and neither could most of the Celtics starters, except for second-year forward Jayson Tatum -- he had himself a night.

Tatum scored 20 points through three quarters as he meticulously dissected Philly's defense for easy finishes at the rim, earned trips to the free-throw line and drained in open and contested looks.

Tatum picked up right where he left off from the Eastern Conference semifinals. After scoring 20 or more points in all five games of the Celtics' series against the Sixers, he stretched the streak out to six on 9-of-17 attempts and finished with a team-high 23 points.

With a double-digit cushion, Brad Stevens was able to give Tatum a lengthy rest as his second unit picked up momentum to finish off the Sixers in a 105-87 season-opening win.

Irving, who eventually supplied seven points to go with his seven assists, helped his teammates find their offense as guys like Marcus Morris (16 points), Terry Rozier (11 points) and Aron Baynes (8 points) led the second unit to a combined 44 points. Still, it was Tatum who changed the complexion of the game for the Celtics.

And with under four minutes left to play it was Tatum who took advantage of a defensive switch that led to Joel Embiid to guard him one-on-one -- a challenge that ended with a Tatum made jumper in Philly's big man's face and eventually led to Stevens emptying his bench. He added nine rebounds and three dimes.

While Joel Embiid finished with a double-double (23 points, 10 rebounds) and Ben Simmons flirted with a triple-double (19 points, 15 rebounds, 8 assists), the Celtics caught fire just in time in the second half.

However, Tatum was difference-maker Tuesday night as the Sixers are going to have to head back to the drawing board in researching new ways to slow down Tatum as the young fella continues to have his way with Philly and is making it look easy.