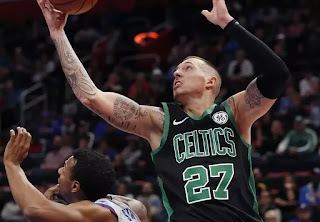 Celtics big man Daniel Theis is out indefinitely after sustaining a right foot injury against the Pistons on Saturday.

The backup center suffered a tear in his right plantar fasciitis and is now in a walking boot. He's expected to be in the boot for up to two weeks, according to Brad Stevens, and will be considered day-to-day until his right foot is healed.

The Celtics' head coach says luckily it's a tear in the muscle rather than something far more serious, an encouraging sign for a big man who put together his best game of the season Saturday. After recording 17 points and 8 rebounds in 19 minutes, Theis said he knew something was wrong that night and received a phone call from the team doctor, who informed him the morning after of his diagnosis.


"All I know is that it didn't rupture," Stevens explained. "It's a tear in the muscle and supposedly it takes a few weeks before he can kind of retest it and make sure it's in good shape and then move on from there."

Reeling from last March's season-ending injury (torn left meniscus), this was great news for Theis. It's a minor setback for the Celtics center, however, for it to happen two weeks into the regular season means Theis will have plenty of time to rehab his foot before returning to the floor sooner than he initially expected.