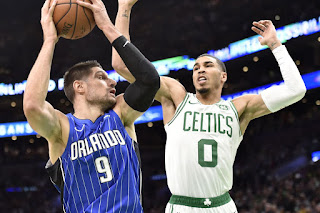 The Magic leaned on the size and athleticism of their front court Monday night at TD Garden and out-hustled the Celtics in a 93-90 upset win.

Nikola Vucevic (24 points, 14 rebounds) set the tone early, feasting on the Celtics -- a team that was without its enforcing big man in Aron Baynes (hamstring). Vucevic made his presence known, draining 11-of-18 from the floor and bullied Celtics big man Al Horford as Boston had no answer for him or his teammate in the front court.

Jonathan Issac also finished with a double-double (18 points, 12 rebounds) as Orlando's front court also disrupted the Celtics' rhythm on the defensive end, which led to many possessions ending in the back en of the 24-second shot clock. Whenever Boston crawled back from a significant deficit, the Magic were there with a defensive stop or an crucial put-back on the offensive end.

In the back court it was D.J. Augustin (10 points, 10 assists) who commanded the offense like a maestro en route to a double-double of his own. He helped the Magic establish the post -- where they scored 42 points in the paint and pulled down 48 rebounds.

Although both teams shot just over 40 percent from the floor, the Magic rattled the Celtics so well defensively that they never gave Boston a chance to breath or settle in. Orlando took away Boston's space at every turn.

It was a horrific night to up against these mighty Magic -- a team equipped with potential up-and-coming stars. They also held Jaylen Brown (5 points) and Jayson Tatum (7 points) down as the youngsters combined for 5-of-21 from the floor.

Kyrie Irving picked things up in the second half after a slow start and finished with a team-high 22 points, 5 assists and Gordon Hayward added 11 points, including three 3-pointers.

The Celtics have plenty of work to do, issues that'll need to work out before it consumes this promising season.

The Celtics never held a single lead throughout the night.