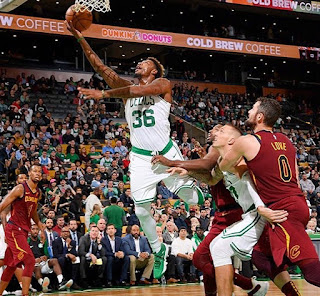 While there weren't a whole lot of positive takeaways from the Celtics' performance in Tuesday night's loss to the Cavs, Marcus Smart shined off the bench for Boston.

His play was a silver lining in what was otherwise a disappointing effort from the Celtics. Smart's offense gave his team a spark off the bench Tuesday.

Defensively, he was in mid-season form -- diving for loose balls, banging down low in the paint against opposing big men and pestering Cleveland's back court. But he also held his own on the opposite end, where he found his shot in the second half.

After missing his first pair from behind the arc, including an air-ball attempt, Smart connected on 2-of-4 from deep and finished with 10 of his 15 points in the third quarter. The Celtics were a woeful 0-for-12 from behind the arc in the first half before Smart and Marcus Morris snapped the drought by connecting on a combined for 4-of-7 attempts.

However, Smart's play wasn't a topic of discussion for head coach Brad Stevens, who instead ripped into his team's defense following Tuesday's loss. Back in the Celtics locker room, the players understood their head coach's concerns, they resonated with players like Smart and Jaylen Brown.


"We've been lackadaisical," Smart explained. "We have to play harder. And he [Stevens] felt like the last couple of games, we haven't and he was just fed up with it. He did what he had to do."


"Fair words," Brown said. "It's early though, let's not overreact but it's a fair assessment from Brad. At the same time let's not jump ship, let's stay locked in and continue the course. It's still preseason."

The Celtics will wrap up the exhibition season with their fourth and final game Saturday night in Cleveland before season opener at TD Garden against the Sixers on October 16.