Report: Kyrie Irving spoke to Pelicans' Anthony Davis about teaming up in Boston 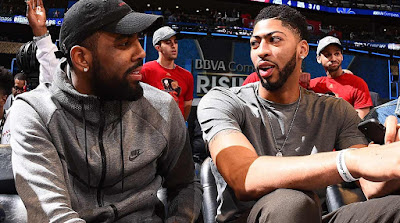 According to The Athletic, Celtics All-Star Kyrie Irving and New Orleans big man Anthony Davis have had conversations about teaming up in Boston.

Irving, who this week announced his plans to re-sign with the Celtics next summer, has spoken to Davis about joining a young championship contending core in Boston.


"Several league sources have said they believe Davis could end up either with the Celtics or Lakers if the Pelicans were to move him," said the Jay King report. "If he landed with the Celtics, he'd be reunited with former Team USA teammate Irving. The two have already spoken about what it would be like to play together in Boston, according to a league source."

If Davis were to make a trade request, the Celtics would have to put an impressive offer on the table in order for the Pelicans to consider moving their franchise star.

Davis would be eligible for a super-max extension next summer with the Pelicans, while the Celtics will look to possibly re-sign Irving, based on his verbal agreement this week.


"Rumors about the New Orleans center’s future have persisted," writes King. "If [Davis] turns down a mega-extension next summer the Pelicans could have no choice but to trade him. If they do, the Celtics will be one of the obvious suitors, with [Jaylen] Brown, Marcus Smart, Terry Rozier, Robert Williams and/or a number of future picks including a possible top-five selection to dangle. Even if Tatum’s off the table, Boston would be able to field a competitive offer."

While details of Irving and Davis' discussions are not known, what has not been a secret is the fact the Celtics fans have had the Pelicans' superstar on their radar for a few years now.

Still only 25 years old, Davis is arguably a top-5 player in the NBA and the league's best center, but is trading away the future worth the risk?

Would Danny Ainge offer up a plethora of Celtics assets, which include first round picks in 2019 (from the Kings, or less likely the 76ers, the Grizzlies, Clippers and Boston's own picks) with some sort combination of young rising stars Jaylen Brown or Jayson Tatum to entice the Pelicans?

Or, maybe the Celtics wait another year or two instead of giving up any talent and they just sign Davis outright. Either way, the fact that a conversation between Irving and Davis about playing together in Boston has come to light and it's not going away anytime soon.