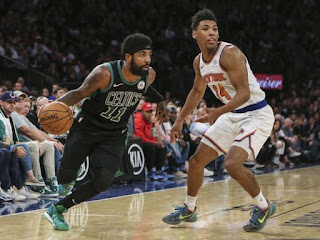 Kyrie Irving's vow to re-sign with the Celtics next summer was a tremendous blow for Knicks fans.
They hoped the All-Star point guard would bolt from Boston to New York.

With the option to opt out of his deal in 2019, Irving surprisingly admitted that he considered heading to the Big Apple following Saturday night's 103-101 win but says he ultimately decided that the Celtics' talented roster was so promising that he couldn't envision himself leaving Boston.

Kyrie Irving on why he’s re-signing in Boston: “If you were in my position, I think it would be an easy decision for you as well. Thinking about who we have and the future and what we’re set up for … Being from Jersey, had history there, but, Boston, there’s nothing like it."
— Chris Forsberg (@ChrisForsberg_) October 21, 2018

Irving also emphasized that while there were other teams he thought about, the Knicks were a strong candidate. He pointed to his New Jersey roots and the Knicks' young core, including All-Star center Kristaps Porzigis as tempting selling points that factored into his consideration.

"Every team was under consideration but obviously New York had a special place for me," Irving explained. "Just being from Jersey and obviously envisioning myself as a free agent and taking a meeting and playing for [coach David Fizdale] and a great young core that they have here, playing with KP [Kristaps Porzingis], that was a big thing before I planned on re-signing back with Boston. But yeah, New York was a strong consideration." [Boston Globe]

While a lot can change between now and July 1, 2019 -- the first day of NBA free agency -- Irving has been very adamant about his intentions to commit to Boston. But don't think that will stop the Knicks from trying to pry Irving away next summer, if anything, quotes like these are only going to motivated the organization to further pursue the All-Star point guard next year.