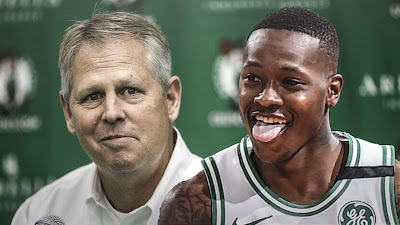 All-Star point guard Kyrie Irving announced his plans to re-sign with the Celtics in 2019, and there may be another key member of Boston's back court willing to stick around for the long haul.

Both sides will need to come to an agreement before Oct. 15 -- the rookie extension deadline, and one day before the opener -- which gives Rozier less than a week to make a decision to either commit with the Celtics long-term or finish off his rookie deal and test the free agency waters next summer. After inking Marcus Smart to a contract extension, re-signing Rozier would presumably solidify the two backup guards as Brad Stevens' go-to guys off the bench.

The potential signing could open the door for something much bigger. If Rozier were to sign a deal worth anywhere between $14-16 million per year, it would assist Danny Ainge with the necessary cap space, along with other pieces, to match the salary of a top-tier talent if he were to ultimately move Rozier in a trade down the road.

On the other hand, it would also give Stevens a long-term insurance policy on Irving, a player who has dealt with nagging injuries throughout his career. Rozier would be a nice safety set for Stevens to have in case Irving goes down, as the Celtics will look to compete for an NBA title throughout the foreseeable future.

Rozier proved throughout last year's playoffs that he's certainly capable of delivering top-notch performances in big moments. While carving out a sixth man role on a championship contending team may seem a bit underwhelming for most rising stars on the verge of earning a starting job, Rozier could see it as a critical steppingstone in his career.

At 24, the thought of adding an NBA title to his resume within the next three seasons would boost his stock considerably. Still, the backup point guard could be missing out on a major long-term payday from a lottery team that's willing to build a team around him.

Rozier has quite a decision to make.