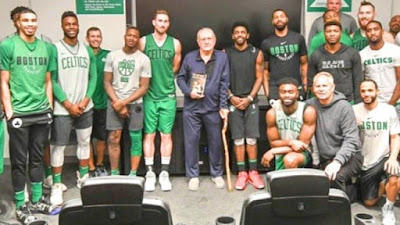 Before the start of the regular season, many wondered how Brad Stevens was going to divvy up minutes between his players from top to bottom. With only one basketball to go around, players have made compromises and earlier this week a visit from a Celtics icon helped this season's Celtics team see things a bit more clearer.

Stevens had Celtics legend Bob Cousy stop by the team's practice facility on Tuesday to talk to his team about some of his past experiences playing in Boston and what it means to play for a storied franchise like the Celtics. He promoted sacrifice, playing for one another and striving for improvement and unselfishness.

When you have a team as deep as the Celtics, problems like these are bound to come up during the season. When you get back two superstars in Kyrie Irving and Gordon Hayward, adjustments are going to have to be made.

Backup guard Terry Rozier admitted that he didn't know much about Cousy prior to his visit, but came away with a lot of positive feedback. Stevens' team can certainly use plenty of it at this point of the season.

The Celtics (2-2) are coming off a loss against the Magic, a team they should've taken down. This was the second straight game the Celtics played down to their competition after escaping the Knicks in New York last Saturday in a game that came down to the wire.

Before we start making parade plans for Banner No. 18, the Celtics are going to have to overcome obstacles if they want to achieve an NBA championship next June. What I mean by that is with all the hype surrounding the team about how they are the team to beat int he east, they are going to have to put the success of the team first before their accomplishments.

Every Celtics player has something to prove. For example, this is a contract year for Terry Rozier, Kyrie Irving and Gordon Hayward are coming back from season-ending injuries, Jayson Tatum intends to live up to the hype and Jaylen Brown wants to make that next step towards an All-Star caliber player.

It is going to take patience and sacrifice from the players and coaches to make sure this season turns out to be a successful one. When you're on a team that has so many different story lines for each player, the end goal can get shifted when minutes and shots are being taken away from time to time.

The Celtics will look to take down the Thunder at Oklahoma City Thursday night with hopes that the past couple of days will translate into a win and get them back on track.