Jaylen Brown shakes off scoring funk in win over Pistons 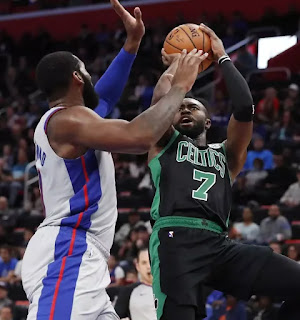 For the first time this season, Jaylen Brown turned in a dominating offensive performance.

The third-year guard had gotten off to a slow start prior to Detroit but bounced back nicely behind a well-balanced attack and efficient shooting. He led all scorers with 19 points on 6-of-13 attempts, including 3-of-7 from deep.

Brown, who emerged as one of the Celtics' most reliable 3-point shooters in last year's postseason, will get a lot of open looks from deep this year as he attempts to regain that same sort of efficiency. He shot at a 39 percent clip on 6.2 attempts throughout 18 playoff games last spring.

He also wasn't that bad throughout the course of the regular season -- when he shot 33 percent from behind the arc on only four attempts a night. Not having Kyrie Irving certainly helped Brown earn more shots than he typically would and having Irving, along with Gordon Hayward, back into the fold at the start of the season meant less touches for the starting guard.

However, Brown found a way to adjust against the Pistons. He established his outside shot early before he blew past defenders and attacked the rim.

The aggressive approached earned him trips to the free-throw line and high-percentage shots as the Pistons' perimeter defense struggled to contain him. Brown's quick first step allows him to beat his defender to rim with ease but developing the 3-point shot is what has forced opposing wings to tighten up on him in fear he'll light them up from deep.

Brown struggled in finding his outside shot at the start of the season. Before Saturday's game, he was 5-of-17 from behind the arc but eventually found his offensive rhythm in a 109-89 blowout win against the Pistons.

Tuesday night's rematch at TD Garden will be an interesting contest -- as is most back-to-back sets -- in seeing what kind of defensive adjustments are made and how Brown will respond to them.