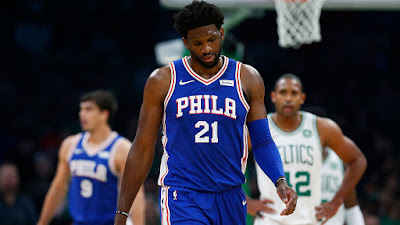 The Celtics and Sixers are considered one of the NBA's oldest rivalries.

It dates back to the 1960's when guys like Bill Russell and Wilt Chamberlain faced head-to-head in the playoffs, it was revived in the early 1980's between Julius Erving and Larry Bird and added another short chapter to its story when an injury-plagued Celtics team topped a favored Sixers squad in last year's Eastern Conference semifinals. Boston only needed five games to punch its ticket into the Eastern Conference Finals and tensions were high between the two teams as guys like Joel Embiid and Marcus Morris exchanged words on and off the court.

Thus, the NBA wasted no time in cashing in on this renewed rivalry by booking the Celtics versus the Sixers for opening night and for a showdown on Christmas Day -- its annual lineup of the league's marquee matchups. However, the Celtics gave the Sixers a reality check Tuesday night at TD Garden, reminding them of just how far ahead they truly are in the east.

In light of Boston's 105-87 season-opening win, it's hard not to look back at the 2017 draft and think what could have been, if you're the Sixers. Some could say Philly was essentially one Jayson Tatum away from being the team to beat in the east this year.

Philly's 2017 trade for the rights to draft Markelle Fultz at No. 1 is one that's going to haunt this franchise for quite some time and may go down as one of the biggest missteps in NBA Draft history. Meanwhile, Sixers big man Joel Embiid gushed over Tatum following the loss.

He talked about Tatum's greatness, how fortunate the Celtics are, and how much he enjoys going toe-to-toe against the second-year forward.


"He's a special one that's going to be great for years," Embiid explained. "The Celtics are lucky to have him.

"We played a lot of 1-on-1 and I was kicking his ass but you know I love him. I love his game and I'm excited to play against him for a long time."

There will be plenty of more battles between these two teams this season and in the foreseeable future. But while some look at the Celtics and Sixers as the rivalry of the Eastern Conference, Embiid doesn't quite see it that way.

By his estimation, there is no rivalry based on Philly's success rate against the Celtics over the past year.


"J.J. [Redick] mentioned it earlier, this isn't a rivalry," Embiid said. "I don't know our record against them but it's pretty bad, they always kick our ass so it's not a rivalry. J.J. mentioned that earlier so we just have to work together and figure it out."

Since the start of the 2017-18 season, the Celtics are 8-2 in head-to-head matchups against the Sixers with Tatum averaging 19.8 points per game, including six consecutive 20-plus point performances. He was the difference Tuesday night and may turn out to be the difference between the Sixers being a top seed in the east and ultimately competing for an NBA title.