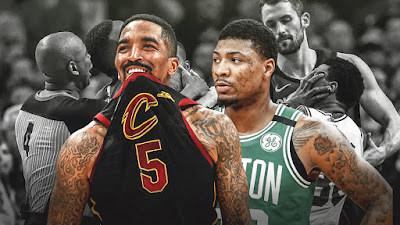 Following his first-half ejection against the Cavaliers, Celtics guard Marcus Smart still had plenty to say to J.R. Smith after the game.

He admitted to inviting Smith out back while he was being escorted off the floor in the second half and said the invite for Smith and him to settle their differences off the court still stands.


Marcus Smart: "I did the action so whatever consequences come with it, come with it." - Here's what else he had to say after being ejected pic.twitter.com/IGFmj9tbkp
— Celtics on NBC Sports Boston (@NBCSCeltics) October 7, 2018


"I told [Smith] to come back to the back," Smart said. "All that on the court, we can handle that off the court. I ain't with that. And that's on my mama, may she rest in peace. Ain't no punk right here.

Smith responded with a pair of tweets shortly afterwards.


The incident took place when Smith and Aron Baynes got tied up while fighting for a rebound. Smith shoved Baynes before Smart stepped in from behind and pushed the veteran shooting guard. He was quickly held back by his teammates Jayson Tatum and Terry Rozier, who were both forced to tackle Smart to the ground in order to keep him from getting to Smith.


Smith smiled throughout most of the altercation. He even waved Smart goodbye as the Celtics guard made his way towards the tunnel and off the floor.

As for the game, it was another 'L' for the Celtics -- their third loss in four tries. Cleveland topped Boston, 113-102 and concluded Boston's preseason schedule before October 16's season opener at TD Garden.