Terry Rozier, Celtics will not reach contract extension before deadline 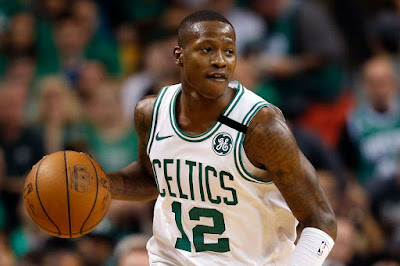 The Celtics and Terry Rozier will not reach an agreement on a contract before Monday's rookie extension deadline, according to the Boston Globe.

Adam Himmelsbach's report states that Rozier is seeking starter minutes and a deal in the $20 million per-year range, according to one league source


"There’s not going to be any extension," the source said. "It’s hard to envision a deal that would make sense for both sides."

Danny Ainge confirmed on Thursday that the Celtics and Rozier's camp were in discussions about a possible contract extension, but according to another league source, talks never really materialized.

Rozier, still only 24, proved he could run a team when given the opportunity, especially after Kyrie Irving went down last spring and throughout the postseason. Last week, Irving revealed his plans to re-sign with the Celtics next summer (most likely a 5-year, $189 million max deal), making it more difficult to sign Rozier to a team friendly contract.

Rozier boosted his value during last season's Celtics playoff run after averaging 16.5 points, 5.7 assists and 5.3 rebounds in 36.6 minutes (team-high) per-game. Rozier will now head into the offseason a restricted free agent and Boston will have a chance to match any offer sheet, if he's not moved before February's trade deadline.

With Irving's pending free agency, the luxury tax beginning to ballon up and Rozier wanting an obvious pay raise, the Celtics will have some decisions to make. Rozier could also take Boston's $4.3 million qualifying offer to then become an unrestricted free agent in the summer of 2020 as another option.

The last time Danny Ainge extended a rookie, was back in 2009 when the Celtics signed Rajon Rondo and it hasn't been done since. A year ago the C's offered Marcus Smart a rookie extension, to which the reserve guard turned down before he signed his new deal this past July worth $52 million for four years.

As the 2018-19 campaign is set tip-off on Tuesday night, it will be interesting to see if the Celtics believe at some point throughout the regular season they'll be unable to match offers made to Rozier next July, despite the NBA salary cap expecting to rise by about $8 million during the 2019-20 season, they may simply try to trade him before then as well.

Coach Brad Stevens has already made it a point to find a role for Rozier this season even with Irving back in the fold.


"I just have to figure out how to get him as many minutes as possible," Stevens said earlier this month during training camp. "He’s tremendous. And, not only in the way he plays when you guys all see him in the games, but just the way he goes about his everyday business. He works as hard as anybody on our roster. It’s immediate energy; it’s noticeable when he’s in the game."

Rozier spoke briefly on the subject of possibly signing an extension to remain in Boston.