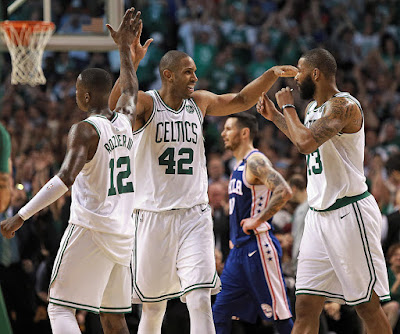 Heading into the 2018-19 season, most have oversold the ceiling of this year's Celtics team, underestimating the kinks that need to be ironed out by Brad Stevens and his coaching staff.

On paper, last year's roster is mostly intact but the injection of Kyrie Irving and Gordon Hayward will certainly change the Celtics' regular season win-total in comparison to the year before where the short-handed, scrappy squad relied on top-notch defensive execution to combat its hit-or-miss offensive firepower. Brad Stevens has a bundle of toys to play with that are more appetizing than the steady diets of 30-plus minutes for guys like Terry Rozier and Marcus Morris -- two reserves who filled in for the absence of guys like Irving and Hayward.

One positive takeaway from the preseason was seeing the Celtics' offense score over 60 points in the two first halves against the Hornets. Boston will be at the Warriors' level in terms of shooting, driving to the hoop and creating all-around scoring this season.

Still, the roadblocks are relevant and prevalent for the Celtics. For starters, Al Horford is a year older. Can he keep up with providing the defensive intangibles that nearly got the underhanded C's into the finals last year?

It's hard to say. At 32, both Boston and his previous employer in the Hawks, spent the last four years being extra careful to keep the 6-foot-10 big man healthy for the postseason.

Stevens is very responsible and luckily flexible, having the luxury of setting minute-restrictions on his players without punting the outcome of games mid-season -- which ensures his stars are healthy long-term. But the Celtics woes on the road throughout last year's postseason run is a cause for concern, angst that'll pressure the former Butler head coach to put the pedal to the metal and raise Horford's mileage throughout what's expected to be a deep playoff run.

Stevens doesn't have another big man who can create, pass and defend all at a high level the way Horford can. Then there's Morris.

The veteran forward is up for a new contract next summer. If his deal expired this past off-season, Morris would have been in the mix for a decent pay day due to his play throughout last year's playoff run.

Fortunately for the Celtics that wasn't the case and his return to the team this year will be interesting to see unfold. Morris' defensive intensity in the front court rivals Marcus Smart's -- the two can act as a lightning bolt, especially for when the Celtics are in the malaise period of the season.

However, his irrational confidence on the offensive end leads to Morris taking the most ill-advised shots. While last season, Stevens managed to corral Morris until eventually the wheels came off as he shot Boston out of very winnable games throughout last year's Eastern Conference Finals.

Throughout the preseason, Morris took 31 shots in 57 minutes, adding up to 10.8 attempts a game in 19 minutes. That's scary, to say the least.

If Morris continues to play this way, then you can look forward to him being traded by February's trade deadline in exchange for a more disciplined forward. Hopefully, this isn't the case.

There's a lot to like about Morris. His hustle, bravado and take no-shit demeanor is something you want to see coming off of Boston's bench and if it pans out, the Celtics shouldn't have an issue getting to the finals given the depth of their roster.

Even at the bottom, Brad Wanamaker has shown flashes of becoming a fine role player who can replace the recently departed Shane Larkin. Last year, Stevens had his work cut out for him, having to shepherd youngsters and misfits in places of established stars.

Now, he's in the business of managing egos. There are also two rising stars in Jayson Tatum and Jaylen Brown in that locker room that expect a certain amount of touches -- both were heavily-relied upon last season and now they're going to be asked to take a backseat after proving they're more than capable in high-stake situations.

How Stevens manages this will be the key to figuring out if Banner 18 hands in the rafters 12 months from now.