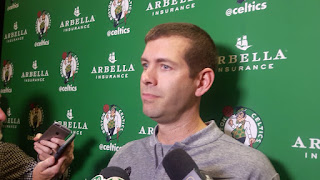 The Red Sox' playoff run to the World Series hasn't gone unnoticed by Brad Stevens and the Celtics.

In fact, the Celtics team has been following the Red Sox throughout the entire postseason. Stevens, who spoke to the media prior to Monday's game against the Magic, was asked about what it's like to be the head coach of a team with championship aspirations in a city that already has one team competing for a title.


"I don't know if we're a part of that conversation right now, it's all about the Red Sox -- all they've achieved this year and certainly in this run they're on," Brad Stevens explained. "It's incredible. We're huge fans and we'll be watching closely. Luckily we don't play each of the next two nights so they'll be on on every one of our TVs."

Stevens says there's plenty to learn from a team like the Red Sox and that he uses the baseball team as a point of reference for him and his guys.


"I know we've had a blast watching them," Stevens said. "We use them as a great example for our team. Everything about them just screams champion so I'm sure hopeful that they can get that done."