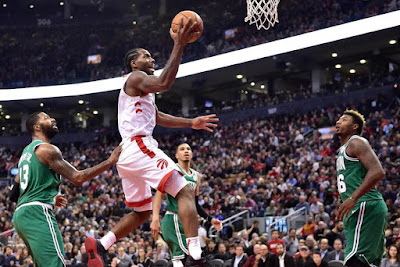 The Celtics had their hands full Friday night in Toronto in what was a statement game from their friends north of the border.

Kawhi Leonard's return to form reminded everyone that he was an MVP candidate just two seasons ago as his dominance on both ends of the floor was contagious among his new teammates. After trailing the Celtics 53-49 at halftime, Leonard caught fire in the second half -- where he scored 20 of his game-high 31 points while creating crucial defensive stops down the stretch.

The Raptors closed out the Celtics on a 12-2 run and put the finishing touches on a 113-101 win. In the process, Toronto also reminded Boston of its depth.

For a second unit that led the league in points per game last season (41.8), the Raptors were able to lean on guys like Fred VanVleet and OG Anunoby for solid production while starters like Leonard and Serge Ibaka (21 points, 6 rebounds) rested. The addition of Leonard has certainly elevated Toronto's defensive prowess as they held the Celtics scoreless for five of the final six minutes but another acquisition that was seemingly overlooked over the summer was Danny Green.

The 3-and-D guard crushed the Celtics from behind the arc, where he drained 4-of-7 from deep and was efficient on the opposite end -- where he created defensive stops and drew offensive fouls on Celtics forward Jayson Tatum. Green finished with 14 points, 5 rebounds and with a game-high plus-25 game rating.

Tatum, who poured in nine first-half points, struggled in the second half. He finished with 16 points on 6-of-16 from the floor but committed five turnovers, including a pair of crucial offensive fouls down the stretch.

Kyrie Irving sprinkled his scoring production in spurts throughout the night and quietly finished with a team-high 21 points. Leading all five starters in double figures, he shot 50 percent from the floor (10-of-20) but couldn't stop the bleeding when the Raptors put the defensive clamps on the Celtics and picked up the pace in transition.

Unlike what we saw against the Sixers, the Celtics ran into a defensive wall against the Raptors in the second half and Toronto capitalized on Boston's struggles on the back of Leonard, Serge Ibaka (21 points, 6 rebounds) and Kyle Lowry, who scored half for Toronto's 10-0 late-fourth quarter surge.

While most critics have overlooked the Raptors as the Celtics' biggest threat in the Eastern Conference, Friday night was a fitting reminder of how much better Toronto is compared to last season. The Celtics' first loss of the season marks Boston's seventh consecutive loss in Toronto.

Raptors: scored 46 points in the paint and shot 46.7 percent from the floor.