Why Kevin Durant, LeBron James in L.A. in 2019 makes a lot of sense 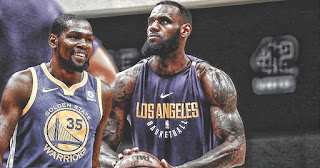 LeBron James and the Lakers embarked on a new era of basketball in Los Angeles over the weekend.
James made his home debut at the Staples Center Saturday night, the beginning of what will be a fruitful future in L.A.

He signed a four-year, $154 million contract over the summer, a commitment made between him and Lakers president of basketball operations Magic Johnson to bring the Lakers back to NBA relevancy.

With plenty of basketball left in the tank and still considered the best player in the world, James will undoubtedly play a role in shaping a roster that will be a threat -- not this year, but later -- to win an NBA title. With plenty of cap space to reel in two max-deals in 2019, the Lakers are destined to form the league's newest Big 3 and if they're able to convince one player to join forces with James, it'll change the landscape of the league in light of a new promising Lakers dynasty.

Kevin Durant's impending free agency will once again put the league on notice next summer. Sources close to the Lakers have already confirmed Durant is seriously considering heading to Los Angeles next year, including a recent report by Brandon 'Scoop B' Robinson of the Scoop B Radio And Basketball Society.

Spoke to a source today who confirmed Kevin Durant will be a LA Laker next year.

“Just like LeBron planned his move LA a year or more earlier, #KD is doing the same right now. They want to form the best duo in the NBA and set up KD to be the face of the Lakers post-#LeBron.” pic.twitter.com/BWR9TOWPMZ
— Brandon Robinson (@ScoopB) September 17, 2018


And if you don't think LeBron hasn't already been yapping into the 2018 Finals MVP's ear about starting a new life in L.A., then you haven't been paying close attention to how things have panned out in the NBA throughout the past decade.

Kevin Garnett's trade to the Celtics in 2007 was calculated years before Danny Ainge pulled the trigger. Dwyane Wade, Chris Bosh and James talked about taking the league by storm years before "The Decision" aired on ESPN and Durant knew he wasn't going to Boston well before Tom Brady surprised him in the Hamptons.

In recent years, the NBA off-season has turned into the WWE of professional sports -- it's filled with drama, plot twists and story lines so good that not even Vince McMahon could predict what's going to happen next. Competing superstars are joining postseason opponents, demanding trades and publicly bad mouthing the organization they currently play for (looking at you, Jimmy Butler). 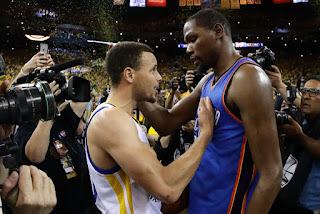 In 2016, Durant and the Thunder blew a 3-1 lead against the Warriors in the Western Conference Finals. It was unfortunate for a franchise that was hoping to return to the finals four years removed from surrendering the title to the new 'Big 3' in Miami, but the deep run was also an indication of just how close they were to reaching the top. In retrospect, they were probably one year away from taking down the Warriors.

Instead, Durant saw an easier way to win his first championship. He left Oklahoma City because he couldn't wait anymore and was ready to move on. Knowing the kind backlash and criticism that would arise for making such a decision didn't matter to Durant -- he already saw another NBA superstar make a similar controversial move and things turned out fine for that guy.

In 2010, James was only a couple of years away from seeing the aging Celtics fade into a rebuild mode -- which would have paved the way for him and the Cavs to rule the east. But he couldn't wait any longer, LeBron wanted to start winning championships -- as many as possible -- to chase Michael Jordan's legacy and figured if he wants to win more than six to top M.J., he better start right away. 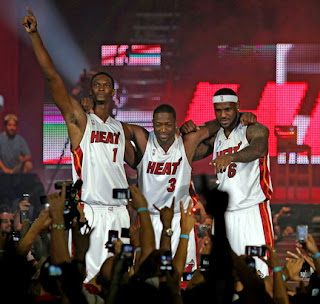 James immediately became the biggest villain of professional sports. No athlete was hated more than LeBron, but it didn't last long.

He was eventually vindicated solely on distinguished merit -- something Durant observed from afar, it impacted him years before he knew he'd be leaving the Thunder to join the Warriors. James and the Heat won two championships throughout its four-year run.

Surprisingly, he even went back to Cleveland to win a third and is now looking for more in the fourth quarter of his career. James is only three championships away from tying Jordan, and don't think for a second that doing so doesn't still mean the world to him.

In James' head, if he wins more or just as many championships as Jordan, he can put the conversation to bed once and for all -- he's the greatest basketball player of all-time. He's halfway there, and the window to win three more in closing quickly.

Aligning with Durant along with another top-tier free agent gives James a shot to pull it off. It will make the Lakers a clear-cut favorite to win a championship in 2020.

Throughout the past decade, no other two professional athletes were vilified worse than Durant and LeBron. The controversial decision to leave the Cavaliers for South Beach may not loom over James' head like it did eight years ago, but Durant's move to sign with the Warriors in 2016 certainly does.

The trash talking he received on the daily bothered Durant so much that he created fake Twitter accounts just to clap back at anyone who said any negative things about him or his move to Golden State. It still bothers him to this day, regardless of being a back-to-back Finals MVP champion.

At this point, Durant is ready to win elsewhere. He knows he has an opportunity to do so in L.A. and when James is eventually ready to retire, Durant can still compete as a member of the Lakers years down the road.

With James and Durant committed, the Lakers will have no problem trying to persuade another on a list of All-Star free agents that are headlined by guys like Kawhi Leonard, Jimmy Butler, DeMarcus Cousins and Kemba Walker.

Insert one of those guys alongside two of the best players in the world and all of a sudden -- cue the WWE music -- we have the new 'NWO' of professional basketball. The two superstars will bask in the bright lights of Hollywood, oblivious of the haters and non-believers.

The Warriors will still be in the conversation to win a title, of course, along with the Celtics. But a James-Durant led duo in L.A. is a very terrifying threat for all parties involved.