EXCLUSIVE: Gordon Hayward opens up about Brad Stevens, Celtics home opener in 1-on-1 with Josue Pavon 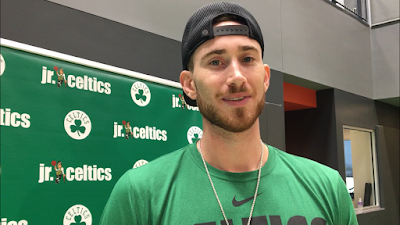 For Gordon Hayward, Tuesday's home opener at TD Garden against the Sixers will most certainly be a memorable night.

It's been a long time coming. One year removed from a season-ending injury, Hayward is excited to compete again, and spoke briefly about the season opener following a Celtics youth girls charity event hosted by Hayward and his wife Robyn.


"For the first game, it's just going to be all smiles to be playing out there in front of the home fans," Hayward said. "Just being on the court again after what I went through; it's going to be a good first-step for me. I'm just extremely excited."

Hayward, who recently starred in The Players Tribune's five-part documentary series titled "The Return" that chronicled his road to recovery from his gruesome left ankle injury, said it was a unique experience for him and his family. It was a window for fans to see what the Haywards went through throughout the year, an emotional roller-coaster that starts from after Gordon's surgery to his return to the floor in a recent Celtics exhibition game.


"They made it really easy for me and my family," Hayward explained. "[It's] just a glimpse of what I went through, what my family went through too -- dealing with the injury. There were a lot of real human emotion and just a chance for fans to see what it was like."

Hayward didn't hold back when it came to expressing his honest feelings. He opened up about how difficult it was for him to see his teammates embark on a deep playoff run without him and even went as far as to say a tiny part of him wanted the Celtics to lose and not go as far as they did -- Game 7 of the Eastern Conference Finals.

But all of that is in the past. Hayward is very much looking forward to playing his first full season as a member of the Celtics -- where a reunion between him and his college head coach Brad Stevens will finally unfold at the professional level.


"I know it was tough on him [Stevens] as well last year because we had talked so much about how he was going to utilize me in the team," Hayward explained. "I know he knew how excited I was to play for Boston. I know that was hard for him to go through and he had to completely change his game plan and what he was going to do.

"Fast forward to the following summer and it was like doing it all over again. So I'm really excited about what we can do this year. We have a lot of work but it'll be a lot of fun."


Click the video below to watch my 1-on-1 with Gordon Hayward in its entirety.