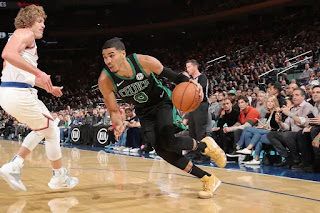 It's a testament of the valuable experience he gained from last year's postseason run that has led him to this newfound level of confidence.

At 20, Tatum has already proven time and time again that he isn't afraid of the big moments and proved it yet again Saturday night at Madison Square Garden.

In the basketball Mecca, the same arena where Celtics legend Paul Pierce crushed the hearts of Knicks fans countless times throughout his career, Tatum drained a dagger late in the fourth quarter. His Pierce-like step-back jumper with 21 seconds left on the clock gave Boston a three-point cushion that eventually turned into a 103-101 Celtics victory.

Last season, when the game was on the line Brad Stevens typically turned to one guy -- Kyrie Irving. It didn't matter which team the Celtics were up against, if the game was relatively close he was going to turn to Irving to carry his team to the promised land and most of the time it translated into wins.

Irving led his team to a plethora of victories -- the biggest reason Boston had home court advantage throughout the postseason before he was shut down in March. But Stevens now has two options at the end of fourth quarters -- Irving and Tatum -- and by the looks of what we saw in New York, he's going to go with whomever has the hot hand.

Last year, it didn't matter. There were rare nights when Irving just simply didn't have it -- reminiscent of Saturday against the Knicks -- still, Stevens would draw up plays for his All-Star point guard down the stretch, hoping he'd deliver.

However, in a game where Irving finished 5-of-15 from the floor, the ball went to Tatum when it mattered most in the final frame. Out of timeouts, he ended up with the ball in his hands, when he got caught on the wrong end of a switch the offense would reset for Tatum to get another offensive opportunity and when he missed a dunk before regaining possession and kicked it back out, Irving gave the ball right back to Tatum down low -- which led to Tatum's fourth-quarter dagger.

It's evident Stevens is enabling his second-year forward, and Tatum's teammates are following suit, especially their starting point guard. For Irving's standards, he's off to a slow start this season.

Through three games, he's averaging 14.7 points while shooting 34 percent from the floor. But Irving has exemplified what it means to be a good leader -- giving his rising star teammate the late-game opportunities to thrive in, which will certainly pay dividends in the long-run.

Tatum finished with a double-double (24 points, 14 rebounds) while shooting 53.3 percent from the floor (8-of-15). He's leading the team in scoring (21 points per game) and isn't showing any signs of slowing down.