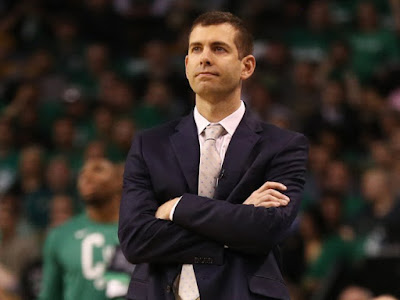 Celtics head coach Brad Stevens ripped into his team for their shortcomings in Tuesday's 102-95 preseason loss against the Cavaliers at TD Garden.

Stevens spent most of his time at the podium criticizing his team's defense, or lack thereof, while also questioning if it's the system in place that was the problem against the Cavs or if his guys just weren't putting in the proper effort.


"You always start with (asking yourself) are you doing it well enough? Stevens explained. "Are you executing techniques? Are we doing it hard enough? All of that. Then you move to, do we need to change it? Which very well could be change either personnel or system. We'll figure out where it is right now but I couldn't be more unimpressed after our first three preseason games."

Defensively, Stevens had a long list of things he didn't like from his team on Tuesday. When asked to pinpoint what bothered him the most about the Celtics' defense, he ran down the list of issues one-by-one off the top of his head.


"Wide open layups, wide open threes, wide open shots, fouls, directing the ball, being able to get into the body of the ball handler without fouling. Being able to pull over in a pick-and-roll and be in the right spot, pretty much everything," Stevens explained. "I mean we got a lot of work to do, it's pretty clear."

Is it only a matter of time before his guys turn things around off of their talent alone?


"No shot that we dominate on talent alone," Stevens said. "No team does that. You have to play together, you have to play the right way. If you have really good players and they all do that you can have a special year."

Celtics will conclude their exhibition schedule Saturday night at Cleveland.