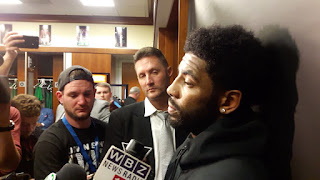 Kyrie Irving is currently in a situation he's never been in before.

It's unique, and nothing like last year -- his first season in Boston. That was a team that relied heavily on Irving to bail them out in the second halves of close games, however, this season is different.

Offensively, Brad Stevens has a bevvy of talented weapons at his disposal. Last year's postseason run forced guys like Jayson Tatum and Jaylen Brown to grow up quicker than they would have if Irving and Gordon Hayward were available.

But on the defensive end, there's plenty to be desired. Although the Celtics (2-2) haven't looked horrible throughout their first four games of the regular season, they also haven't looked great either.

Now, Irving, who has been very open about mindset and plays early on throughout the season, revealed to the media following Monday's loss against the Magic that he is still learning how to get the most out of his teammates, while also trying to find ways to be best effective. In terms of individual changes that need to be made, Irving says it starts on the defensive end.

Speaking on his longevity, Irving also mentioned the importance of becoming a solid defender in the NBA if he plans on extending his career a decade from now.


"I'm asking myself to do a lot more on the defensive end," Irving said. "The next eight or ten years, God willing for me to play that long, I want to take that challenge on that end. In order to do that, you have to be in phenomenal shape."

#KyrieIrving says he vows to commit himself more on the defensive end in an effort to help his team this season #Celtics pic.twitter.com/PR5IotwF8z
— Josue Pavón (@Joe_Sway) October 23, 2018

On the opposite end, Irving will continue to try to find ways to get the best out of his young and veteran teammates in a manner that's conducive to winning basketball. He has to make sure guys like Tatum, Brown, Horford and Hayward are involved and in the flow of the offense for when if one of their names are called down the stretch they're ready to deliver.

Irving already knows that with high expectations comes a high level of focus and effort from opposing teams that are looking to take out the team many are calling the best the Eastern Conference has to offer. Irving's been a part of those teams in the past.


"I've been on a team before where we've had the target on our backs and it takes some getting used to, it really does" Irving said following Monday's 93-90 loss against the Magic. "I think that sometimes it's a little unfair of the expectations we have of our young guys where guys have never been through anything like this before -- the expectations to play at a certain level every single night is demanding on you, including myself."

It's going to take a lot more time for him to get on the same page as his teammates. The transition from last season to this year hasn't been an easy one for the Celtics' All-Star point guard, who is now trying to find the best way to recreate himself while putting his teammates in a great position to be successful.


"Being on a team like this it's a challenge for me to figure out where do I fit in all of this," Irving said. "How do I lead a team like this the best way I can with other great players? It's all a learning experience. I just try not to put too much pressure on it because everyone else does enough of the pressure for us so I just try to keep everyone else calm, keep myself calm and just realize that it's a long season. Nights like this you take a hit on the chin, learn from it, and move forward."