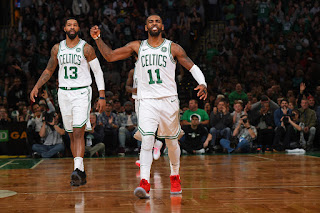 Upon entering his second season with the Celtics, Kyrie Irving had to slightly adjust his role as the team's leader.

The days of having to put the team on his back night in and night out is a thing of the past. But seeing Irving take less shots and pass up on scoring opportunities for the sake of his teammates in an effort to become a stronger facilitator has led some to believe that maybe Irving isn't the same player we saw last season.

That's true, he isn't the same player but it's not because he isn't capable. Irving can still flip that switch and go into domination mode.

It's just not what's best for this season, for this team and this early. The Celtics are loaded with talented guys like Gordon Hayward, Jayson Tatum and Jaylen Brown -- a trio of players who in one capacity or another still have a high ceiling to fulfill between now and the end of what's expected to be a deep playoff run.

Irving has done a commendable job of getting the best out of his teammates. So far this season, Jayson Tatum has come up big in clutch moments, the same can be said about Marcus Morris and the second unit is coming into its own.

While most of the praise tends to fall on Brad Stevens for implementing the foundation for his players to succeed, Irving deserves some praise as well. Offensively, the Celtics All-Star point guard is averaging a career-low 14.5 field goal attempts a night, creating for his teammates and picking the right moments to dominate the ball and give his team an advantage -- just like he did countless times last season and that's what we saw throughout the third quarter of Tuesday night's 108-105 win over the Pistons.


"Law of averages. Law of averages," Brad Stevens emphasized when asked about Irving's performance. "Which means, he's got more coming."

Irving not only caught fire and dominated the frame, he nearly single-handedly outscored the entire Pistons team -- 13 points -- tying Detroit's point total while draining 3-of-4 from deep. He led the Celtics on a 25-13 run and extended their lead to 14 -- their biggest of the night --  before the start of the fourth quarter.

The Pistons never pulled ahead. Irving finished with a season-high 31 points to go with his 5 assists.

Just last week following a loss at home, Irving talked about his newfound responsibilities and how challenging this season has been for him while trying to keep things balanced.


"Being on a team like this, it's a challenge for me to figure out where do I fit it in all of this," Irving said following last week's loss against the Magic. "How do I lead a team like this the best way I can with other great players? It's all a learning experience. I just try not to put too much pressure on it because everyone else does enough of the pressure for us so I just try to keep everyone else calm."

Irving took a big step into the right direction Tuesday night and will look to do the same Thursday night when a new challenge awaits in the form of the undefeated Milwaukee Bucks.

Celtics: Shot 44 percent from the floor, while the defense forced 17 Pistons turnovers.