Markelle Fultz: 'I feel like I would fit well in Boston' 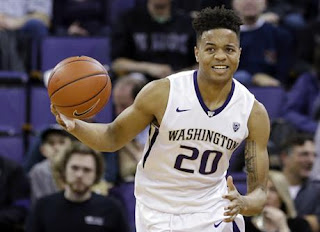 Markelle Fultz isn't hiding the fact that he hopes the Celtics select him at No. 1 in next month's NBA draft. In fact, it would be a dream come true.

Fultz spoke to ESPN's Jeff Goodman this week about the possibility of becoming a member of the Boston Celtics. He's planning to meet with Danny Ainge and the Celtics organization before next month's draft.


"I've talked to Danny a few times, and they want to get me to come out there for a visit," Fultz told ESPN. "They just want to get a chance to know me better as a person."

Fultz, who is considered a top prospect, said that not only does he want to be the No. 1 pick in the 2017 draft but also added that he thinks he would fit well with the Celtics.


"I want to be the No. 1 pick really bad, Fultz added. "It's been a dream of mine since I was a little kid, and I feel like I would fit well in Boston."

He also added that he thinks him and Isaiah Thomas -- who also attended the University of Washington -- would complement each other well on the same team. The two Washington products formed a relationship on Fultz's recruiting visits and have stayed in touch throughout the season.


"We can both play on or off the ball," Fultz said. "We can both score and also pass. I think we'd be great together. When we've talked since the lottery, we haven't really talked about basketball much. He's been through a lot lately."

Fultz averaged 23.2 points, 6 assists and 5.7 rebounds per game last year as a freshman.