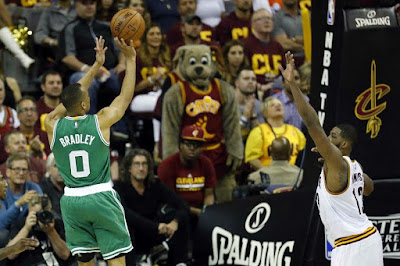 Just when most thought all hope was lost, that little thing called Celtic pride revealed itself on the way to a victory in the Eastern Conferance Finals that for all purposes, was not suppose to happen, especially on the road against the defending NBA champs.

Such was the case on Sunday night when Avery Bradley hit a game winning 3-pointer to cap-off a 21-point comeback, in a 111-108 Celtics' win over the Cleveland Cavaliers in Game 3

Bradley's shot, from the left wing bounced on the rim four times before going down, stunning the Quicken Loans Arena crowd in the process. The play, drawn up by coach Brad Stevens capped an impressive Celtics rally, and all of a sudden it's a series after a horrendous Game 2 performance.


"We have guys who have chips on their shoulders," said Boston's Coach. "We knew that Friday (Game 2) was a disaster. It wasn't worth all four. It was worth one. So we got back together."

Marcus Smart, who started in place of Isaiah Thomas (hip), hit seven 3's and finished with a cereer-high 27 points (playoff or regular season), 7 assists and 5 rebounds, while Bradley scored 20 points and dished out 4 assists. Al Horford added 16 points, 6 assists, Kelly Olynyk chipped in 15 points off the bench. Jae Crowder notched a double-double of 14 points and 11 rebounds to go along with 4 assists in the much needed win.


"Everybody had to step up their game tonight especially with one of our brothers down," Smart said. "Our love and support goes out to Isaiah. We wish he could be here but we understand. We just kept fighting. Everybody did their part."

Kyrie Irving led all scorers with 29 points and 7 assists, while Kevin Love finished with 28 points and 10 rebounds for Cleveland. Tristan Thompson added 18 points, 13 rebounds and J.R. Smith chipped in 13 points and grabbed 8 rebounds in the loss.

LeBron James had one of his worst playoff outings of his career, finishing with 11 points and 6 turnovers, including going scoreless in the fourth quarter for the first time since Game 4 of the 2011 NBA Finals. A fan heckled the superstar about his poor performance on his way to his postgame press conferance.


"I didn't have it," said James. "You let a team like that grab momentum you almost knew a shot like that was going in."

The Cavaliers led 77-56 in third quarter before Marcus Smart got hot and Cleveland settled for jumpers. Smart would tie the game 95-95 and both teams exchanged baskets in the final minute. Jonas Jerebko (10 points off the bench) hit a go head jumper for the Celtics (108-106), followed by a Kyrie Irving driving layup to tie it up again with 10.7 seconds remaining.

Following a Celtics timeout, Brad Stevens drew up a perfectly executed play that freed Avery Bradley to calmly hit a 3-ball, leaving only 0.1 left on the game clock for the win


"We decided were going to go out and play hard, swinging." Bradley said. "We never counted ourselves out."

Celtics showed they still have life and now trail the Cavaliers 2-1 in this best-of-seven series, with a chance to even it up 2-2 come Tuesday in Game 4.