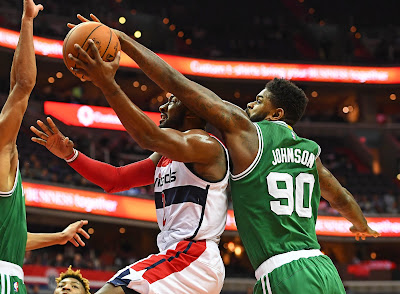 Isaiah Thomas did not participate in practice on Monday after getting his tooth knocked out in the Celtics Game 1 win over the Wizards. The All-Star point guard had dental surgery done to repair the damage caused by Otto Porter's elbow.

Thomas, who finished with 33 points and nine assists to lead the Celtics to a 123-111 victory to take a 1-0 series lead over Washington, will play in Game 2 despite having six hours of dental done and still being in pain.


“I’ve taken a thousand hits like that and my tooth never came out,” Thomas said shortly after Sunday’s victory. “Pain is temporary. We’ll worry about it when the time comes.”

Brad Stevens added: “It’s pretty significant as you can imagine... [but] he's playing."

It looks like the Gerald Green (as a starter the C's went 5-0) is likely over for now. Amir Johnson, who turned 30 on Tuesday, will return to the Celtics starting lineup. Whether Markieff Morris will play or not due to a left ankle sprain sustained in Game 1 (game-time decision), Stevens wants to avoid another early Washington run like the one on Sunday, when the Wizards jumped out to a 16-0 lead to start the first quarter.

If Markieff Morris does play, there's no word if he'll be on a time restriction or not, as the Wizards are keeping a tight lip on his injury.


“Yeah; that's between me and Scott," said Morris. If it had to be someone to tell me I couldn't play it would be him.”


“That’s why I used the word anticipated, said Stevens. "That was a good way of saying it. I didn’t want to spend the last hour thinking of what word to use. That guy [Morris] is a really good player. You have to play him as if he’s 100 percent"