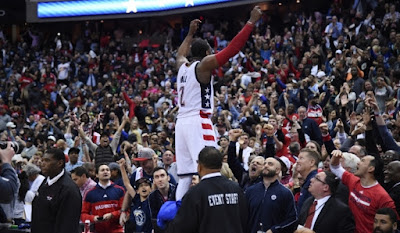 The Celtics had the game in their hands in final minutes of Game 6 before John Wall and the Wizards snatched it right out to force a winner-takes-all Game 7 at TD Garden.

Wall tied the series with a dramatic game-winning 3-pointer, topping the Celtics, 92-91.

With possession, a five-point cushion and 85 seconds left on the clock, Isaiah Thomas made a terrible pass that was picked off by Marcin Gortat which led to a Bradley Beal 3-pointer and was followed by Thomas committing a shooting foul on Wall. Before Wall tied the game at the free-throw line, he blocked Thomas' 3-point attempt and made the biggest shot of the night.

Al Horford banked a 16-footer with seven seconds left to break the tie (91-89) right before Wall stared Avery Bradley in the eyes at the top of the key and drained a 26-foot 3-pointer, topping the C's by one points. With three ticks remaining, Washington used their foul-to-give on Kelly Olynyk that shaved two seconds off the clock, before Thomas heaved a 3-pointer off an inbound pass that clanked off the back of the rim.

Thomas (7 assists) and Bradley (4 steals) both led the Celtics with 27 points, Horford poured in 20 points and Jae Crowder added 10 points and 8 assists.

In what was a back-and-forth game through three quarters, the Celtics led throughout  most of the third and took a 69-66 into the final frame. Thanks to a 10-0 run, the C's grabbed a 42-41 lead at the half -- their first lead since making the first shot of the game in the first quarter.

The Celtics only shot 35 percent from the floor in the first half but grabbed the momentum in the third quarter before Wall caught fire in the fourth. Thomas broke a fourth-quarter tie with a 5-0 run.

His 3-pointer with 1:34 left made it a two-possession game but after Marcus Smart took a charge from Wall for the Celtics to regain possession with a five-point lead, Thomas' terrible turnover turned the tables on Boston. For a moment it seemed like Horford's bank shot was the series-clinching play that would have given the Celtics their first Eastern Conference Finals berth since 2012.

But Wall had other plans. After the game, Wall took a shot at the Celtics players for wearing all black before the game.


"I ain't going home. Don't come to my city, wearing all black, talking about a funeral," Wall said to ESPN's sideline reporter. "We worked too hard for this. All we ask for is a Game 7, 50-50."

Celtics will host only the second Game 7 of the 2017 NBA Playoffs on Monday night at TD Garden.

The Wizards were ice cold from behind the arc but that didn't discourage Beal and Wall from draining two game-changing 3-pointers in the final minutes. Washington finished 5-of-24 from deep while the Celtics finished 11-of-35, including Thomas' 5-of-13 and Bradley's 3-of-6.