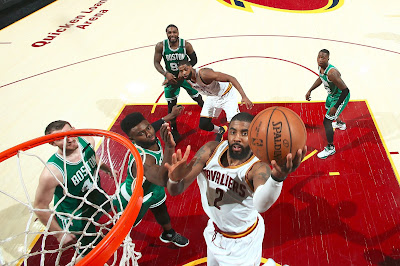 The Celtics had a golden opportunity on Tuesday to even up the Eastern Conferance Finals at 2-2 after an impressive Game 3 win at Quicken Loans Arena. After leading for most of the night in Game 4, Boston had no answers for Kyrie Irving as he poured in 42 points to help the Cavaliers to a 112-99 win to take a commanding 3-1 series lead in this best-of-seven matchup

After some criticism on Sunday night for an 11-point performance, LeBron James responded by finishing with 34 points, 6 assists and 5 rebounds for Cleveland, who are now one win away from a third trip to the NBA Finals.

Kevin Love added another double-double of 17 points and 17 rebounds to go along with 5 assists in the win.

James picked up four fouls before the end of the first half, which allowed Irving to take over in the third quarter and James scored 15 of his total points in the final frame

Boston was up 57-47 at the half and  lead by as many as 16 points before Irving scored six straight layups, two 3-pointers and a free throw in less than a span of five minutes. He capped-off his 19-point third quarter with buzzer beating 3-ball to put Cleveland up 87-80, as the rest of the team outscored the Celtics 40-23.

Despite Irving rolling his ankle after he stepped on Terry Rozier's foot, he stayed in the game and picked a part the Celtics defense that saw three different defenders on the All-Star point guard throughout various moments in the second half.


There's choices," Boston's coach Brad Stevens said. "I'm not sure there are good choices. When he gets going like that, he's tough to stop. The ones we gotta look at are the ones he got at the rim."

Once the Celtics lost their lead, the closet they would get was three points before the Cavs ran off with the victory in the fourth quarter. Boston is now one game away from elimination and return to the TD Garden to look and extend this series in Game 5.

Boston loss by an average of 29 points in Games 1 and 2 last week to the Cavaliers, but even without Isaiah Thomas in the lineup, they know the task at hand


"I feel like we're humble enough to know we haven't played well at home," said Jae Crowder. "We want to give our home crowd a better outing than we put out the past two games."

The Cavaliers outshot the Celtics from the field 59.5 percent to 44.3 percent and outscored Boston in the paint 58-34. Isaiah Thomas visited a hip specialist and will wait to see if he will require surgery or not. The C's are 5-4 at home during the postseason after going 22-5 from January 1, until end of the regular season.