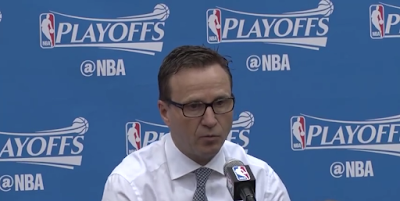 Head coach Scott Brooks didn't agree with Kelly Oubre's reaction to Kelly Olynyk's hard screen, but says he understands why Oubre did it.

Brooks and his Wizards expressed their frustration with the Celtics' physicality after Game 3, and say it's something they've been dealing with the entire series.

After Olynyk committed a hard screen on Oubre in the first half of Game 3, Oubre got back on his feet, charged towards Olynyk and shoved him to the floor. Oubre was ejected but that didn't slow down the Wizards as they cruised to a 116-89 blowout win.

When Brooks was asked about Oubre's second-quarter ejection he made it clear that he doesn't support the retaliation made by his young forward, but understood why Oubre was so frustrated.

"I'm not saying that that was the right thing to do. We have to focus on playing basketball. We can't control what they're doing; we just have to control within our gameplan and stay focused. I haven't talked to him, definitely will talk to him. We've got to keep our control. You've got to let the referees call those calls. At that particular time, they did call the right call."

After Game 3, Wizards big man Marcin Gortat expressed his feelings on how physical the Celtics have been throughout the series and says it's a tactic by Boston that the Wizards have to make sure they don't fall into. Gortat echoed the same feelings his coach said about Oubre's reaction to Olynyk's screen -- he didn't agree with it -- but says that the Celtics have been the one initiating all the tough talk, pushing and shoving.


"We can't fall into their game; shoving and pushing and talking and trash talking, we have to stay and be who we are," Gortat said. "We gotta play hard, we gotta hit, we gotta foul hard if we have to but we ain't gonna have to start doing stuff that's gonna take us out of our game. We had situations today obviously with Kelly -- he lost his cool a little bit but he's still young. He has to learn from it and we just have to play our game, play together, help each other, play for each other and that's how we're gonna beat them."

Gortat also added that the Celtics haven't been the most physical team him and the Wizards have seen this postseason and that he isn't going to back down to Boston's toughness.


"There's nothing even close to about the toughness, there's nothing even close to the first round for me (against the Hawks)," Gortat said. "Going against Dwight Howard and then going against (the Celtics') bigs, it's not even close. I feel very confident, I have a lot of confidence, now a lot of energy. I'm gonna go out there and just battle everybody. We have situations when sometimes I'm attacking the glass by myself and I have to fight against two, three guys because we have a lot of stretch guys that are going to shoot threes and I'm basically in the paint by myself.

Click the videos below to watch Brooks and Gortat press conferences.