Paul Pierce plays his last NBA game, will have his number retired by the Celtics 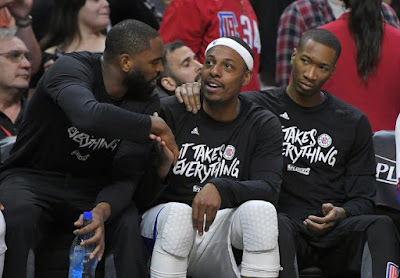 Clippers forward Paul Pierce made his curtain call on his NBA career at the Staples Center in Sunday's Game 7 loss to the Jazz. Utah won 104-91 and will advance to the Western Conferance semifinals.

Pierce stated before the start of training camp in October, this would be his 19th and final season as he would retire in Los Angeles, the city where it all started for him as a basketball player.

"The Truth" scored 6 points in 22 minutes, including a vintage And-1 bucket as his final points for the Clippers, in the last game of his professional career.


In October Pierce went on record stating he would sign a one-day contract in Boston and retire a Celtic at the conclusion of the 2016-17 season.


"I think I owe the fans and I owe myself that much, just to be able to put that uniform on one more time and go out that way, say I retired a Boston Celtic," Pierce told ESPN.

On Monday morning, Wyc Grousbeck spoke with CBS Radio in Boston on Pierce's legacy and confirmed that his number will be retired.


"He's just a winning, charismatic personalty," said Grousbeck. "We went through ups and downs together, we built it back up together, he stuck with us and we built a team around him and that was a lot of fun."

Grousbeck added: "[Boston] is his basketball home. He's our Finals MVP and he's the last #34 ever for the Celtics." [CSSNE.com]

Pierce also took to Twitter to thank coaches, family members, the media, fans and of course the city of Boston.


I'd like to thank the fans media members who followed me u made he who I am as a player the Poeple who loved and the people who hated me TY
— Paul Pierce (@paulpierce34) May 1, 2017

I gave this game all a had my whole life I'm thankful for that also to my family who seen it all from the beginning thanku
— Paul Pierce (@paulpierce34) May 1, 2017


As if that wasn't enough to get you a little teary eyed, The Players' Tribune, added another chapter to Paul Pierce's multimedia documentary; "I Called Game" titled "A Tribute to The Truth."

Click below to watch The Truth's tribute video, if it hasn't already sunk in yet, one of the greatest players in the history of the NBA is walking away from the game. We salute you... Paul Pierce!