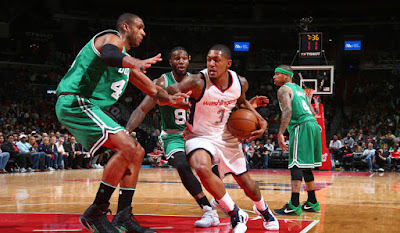 It's not every game you see a 26-0 run, but when you do witness it it's as demoralizing as can be for a team and chances are it will decide the outcome of the contest.

The Celtics were on the wrong end of that 26-0 run that came in the third quarter and it deflated them as the Wizards won Game 4, 121-102, knotting the series at two games apiece.

Bradley Beal scored a game-high 29 points and after going 0-for-9 from the floor, John Wall scored 14 points before halftime on his way to 27 points, 12 assists and 5 steals. Otto Porter Jr. poured in 18 and Markieff Morris notched a double-double (16 points, 10 rebounds).

After falling into an 8-0 hole, the Celtics outscored the Wizards 24-12 and for the first time of the series held a lead (24-20) at the end of the opening 12 minutes. And in the second quarter, the Celtics looked even better when they opened up a 12-point lead (40-28) before the Wizards responded with an 11-2 run and pulled to within three points.

Both teams headed into the break tied at 48 but what transpired in the third quarter sealed the Celtics' fate. The 26-0 run was more than enough to put the Celtics away and gave them a prep quarter for Game 5 in Boston as the fourth quarter turned the game into a scrimmage.

Isaiah Thomas scored 17 of his 19 points in the first half, Kelly Olynyk (14 points) and Terry Rozier (16 points) led the bench and Al Horford finished with 11 points, 5 rebounds and 5 assists.

The Wizards created defensive stops to keep their run alive and scored in transition before the Celtics had a chance to get back and regroup. Wall found his guys for open looks while his big men pulled down rebounds and kept possessions alive.

The Celtics will have a chance to grab a 3-2 lead on Wednesday when they will host the Wizards in Game 5 at TD Garden.

The Wizards not only out-rebounded the Celtics, 42-27, they also shot close to 51.8 percent from the floor. Washington's defense also forced 18 Celtics turnovers -- which set the tone in the second half during and after their colossal 26-0 run.