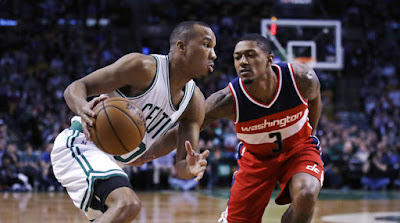 With the Celtics up 2-0 over the Wizards, the series now heads to the Verizon Center in Washington D.C.

After a knocked out tooth (Isaiah Thomas), bloody nose (Otto Porter), a sprained ankle (Markieff 'Not Marcus' Morris). You can add a hip injury to Avery Bradley to the list of physical ailments between these two Eastern Conferance rivals after just two games.

Bradley checked out of the Game 2 late in the second quarter after making a layup and noticeably grabbing his right side when he was running back down the court. The Celtics guard would return after halftime and contribute to the C's beating the Wizards in overtime.

Bradley did sit out of practice on Wednesday due to what is being called a right hip pointer to rest and get ready for Game 3, which he plans on playing in


Despite returning at the start of the third quarter in Game 2, Bradley did give credit to his teammates who stepped up in the second half to help lead the Celtics to victory and a 2-0 series lead over the Wizards


“I mean personally for me it doesn't really mean much. Those guys like Terry [Rozier] and Jaylen [Brown], to come into the game and play minutes, hard minutes and make plays for our team, that's bigger than me coming back honestly,” Bradley said. “Those guys are young players and they stepped up to the plate and they really helped our team out [in Game 2].” [CSNNE]

Brad Stevens confirmed Gerald Green will make his return to the Celtics starting lineup on Thursday, as he will replace Amir Johnson for the second time this postseason.


“In the last four games of the Chicago series, the way we started the games with the exception of the one at home, was good,” said Stevens. “Obviously, we didn’t start either of the last two games well. But the most important thing as I looked at it, was I wanted to keep our bench intact.” [CSNNE]

The Celtics are 5-0 in the playoffs with Green in the starting-five, he provides shooting, scoring and energy that has resulted in wins.


“Again, we’ve been good all year with the Amir-Al combination,” Stevens said. “But I think, one of the things that we do when we play our best is spread people out. We want to be able to play with space and shooting.” [CSNNE]

As for Washington, look for them to continue to be physical, especially in the paint. Markieff (not Marcus) Morris will try to keep Al Horford in check, hopefully he wont body slam him into the front row like he did in the first minute of Game 2, but be on the lookout for any such 'WWE' move.

Does anyone know if Kobe gave any advice on any potential choke slams?