Isaiah Thomas getting some help from a former L.A. Laker 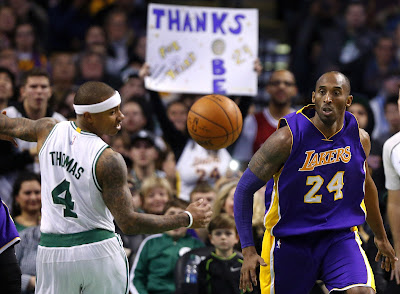 For so many decades there has been no love lost between Celtics and Los Angeles Lakers fans. Even today there is still a certain level of hatred between both franchises.

But Celtics fans might be warming up to the idea of ex-Laker and former five-time champion Kobe Bryant giving some advice to All-Star Isaiah Thomas since the start of the playoffs and it has resulted in the C's winning their last six in a row.


“We’ve been in communication the last couple of weeks, ever since my sister (Chyna Thomas) passed,” Thomas said. “He’s been a big help since Game 2 (of the Chicago Bulls series). We actually watched film.” [ESPN]

Thomas has been getting all types of support from current and former NBA players for the last few weeks. It's been truly inspiring to witness what the Celtics guard has been able to do on the basketball court, considering all he's been through.

Now to hear that the Dolly Lama of this generation of basketball in Kobe Bryant, has been in Thomas' corner since the start of the postseason, has to put a smile on the faces of true ball fans.


“He was going over my film with me, and teaching me things he looks at when he watches film,” Thomas said. “That’s probably been a big help for me.” [ESPN]

Thomas also added that he and the 'Black Mamba' text each other before and after games.


“He’s definitely helped,” Thomas said. “Tells me what he sees and what I should be watching for on film...mentally he’s on a different level than anybody I’ve ever met.”

“I emailed him my film and he watched every second of it, telling me what times to go to, and what to look at and certain things I didn’t look at when I watched film,” Thomas said. “Like I said, mentally you can tell he’s one of the greatest ever.” [ESPN]

Though it's ironic that a Laker is helping a Celtic, both players have become good friends. Bryant has even given Thomas a nickname; The Mighty I.T. as part of Kobe's web series which focuses on current NBA players.


“Any nickname he gives me, I’m going to take,” Thomas said.

As a Celtics and basketball fan you truly have to relish in the fact of what Thomas has done through the first eight games of the postseason, especially Game 2 on Tuesday night.

Thomas scoring a career-high (playoffs and regular season) of 53 points on what would have been his late sister Chyna's 23rd birthday, was truly remarkable. Overall the NBA and sports world have been put on notice about 'the little guy' and his big heart.


“It doesn’t seem real, for Kevin Garnett to leave me a voice mail, things like that, things you don’t ever dream of,” Thomas said. “Get done with a game and see a text message from Kobe, Tom Brady, Floyd (Mayweather Jr.), all those type of guys I’m trying to follow in their footsteps. I’m trying to keep going as a basketball player and as a person.” [ESPN]