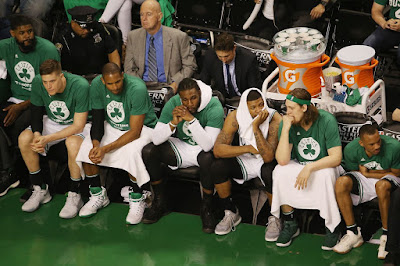 It's been a few days now since the Cleveland Cavaliers eliminated the Celtics from the Eastern Conferance Finals and though the 2016-17 season didn't end the way most wanted it to, you can't help but think that this team exceeded all expectations and then some.

Is there a clear divide that exists between the current NBA champs and Boston when it comes to who rules the East? Of course there is, but the Celtics did have a successful season and with the right moves the gap can be narrowed while building towards the future.


“After [Game 5], obviously, we were all disappointed in the way we ended the season, especially with the losses at home,” said Avery Bradley, the longest-tenured member of the Celtics. “But we were able to take a lot of positives away. Out of all the teams in the NBA, we're one of the three teams left at this time of the year, and that was one of our goals. Obviously, our main goal was to make it to the championship and win it. But for us to be in the Eastern Conference finals after the first year of this team really being together, adding additions like Al Horford and Gerald Green -- I can go down the list of guys that we needed to learn to play with -- and for us to talk about where we wanted to be and actually make it, it's a big-time accomplishment." [ESPN]

A year ago, the Celtics had emptied out their lockers in April after losing in six games to the Atlanta Hawks, while the big question remained for Danny Ainge, what's next?

Boston needed to sign a top-tier free agent, draft a contributing player, reach the 50-win plateau and earn home-court advantage for at least the first-two rounds of the playoffs.

If you're been keeping track this season, that's a check mark across the board, when it came to the Celtics 'to-do' list.

The Celtics signed Al Horford; a savvy power-forward/center that does everything well and proved his nay-sayers wrong, especially when it came to his postseason production. In short Big Al made his teammates better, including C's All-Star, Isaiah Thomas.

"Al had a fantastic year from the first day, and yeah, in the playoffs he had some remarkable moments in games and stretches, " Ainge said. "He seems to be able to go a little bit more when we need him to, where he didn't need to do that as much in the regular season when he was more of facilitator. He reminds me so much of KG in that he can go and get you more if you need it, but he loves being part of a team. He reminds me a little of Bill Walton, too. They love to pass, they love to play and they love to play the game the right way. He is a joy for every single guy on your team. Like, every guy on our team, you know, Al Horford may be their favorite teammate. It's been a pleasure having him around, and he's made our team better."

Ainge added: "I don't think it's a coincidence that Isaiah, Avery and Jae (Crowder) all had better years. Al has helped facilitate that in a lot of ways. [Boston Herald]

The athletic-rookie Jaylen Brown (chosen third overall last June) had many bright spots this season, even making his way into Brad Stevens' starting lineup (20 games) and went head-to-head with LeBron James without being intimidated in the least bit while gaining Bron-Bron's respect in the process.

The future looks bright for the high-flyer, who says he's all in to be a part of something special here in Boston. Brown has already let Ainge know he wants to play for the Celtics' Summer League team, which isn't uncommon for second-year players. The 20-year-old is clearly no stranger to hard work when it came to his first NBA season.


“I had to fight for everything I got,” Brown said. “I had to earn every minute, earn every possession, and I liked it like that.” [Boston Globe]

Ainge knows they're not giving away second place trophies just for making it to the Conferance Finals, as he has clearly acknowledge that there still more work to do despite a great season full of ups and downs.

"I think that the fact that we were on of three teams still left playing was something to be proud of, but it's not necessarily where we really are. I think sometimes teams make false assumptions based on things like that. I think that our team in not that much different than a lot of our competition in the East. We had a good year in spite of some injuries, you know with (Al) Horford going down early and Isaiah (Thomas) missing a short time and Avery (Bradley) missing 22 games in a stretch. We had to overcome some injuries and it was good because our depth got a chance to play. Everybody on our roster got a chance to prove their worth.

"But I feel like it doesn't really matter what we've accomplished. If we'd lost Game 7 against the Wizards, I don't feel any different than where we are today. I know that we're good. I know that we're not great. I know that we still have more to do and you know, that the next step is bar far the hardest." [Boston Herald]

So what's on the agenda this summer for the Celtics general manager? Trade the No. 1 overall pick or even Isaiah Thomas?
While some chuckle at the notion that 'The Little Guy' is a 'max-player' or a center piece on a championship contender, no one is smiling or laughing harder than Ainge when the question of money is brought up concerning the 'worth' of Thomas come this offseason or next.

"All I know is that he's had an amazing year, and who doesn't want Isaiah Thomas on their team? Like, you've got to be kidding me," said Ainge. "Why do fans need to worry about how much money he makes? I can understand if Isaiah and his wife and his agent are worried about that, but I don't understand why that's a conversation that needs to be had in the media."

Ainge added on those who tend to devalue his All-Star guard: "Listen Isaiah has had one of the most impressive seasons in Celtics history. I don't know why people can't see that. I don't know why all of sudden they have to jump to the next question of is he as good as Larry Bird or Bill Russell. Why can't we just enjoy the fact that he had a great year?" [Boston Herald]

Thomas finished third in the NBA in scoring at 28.9 points per-game, two-tenths of a point behind James Harden, while being voted Second All-NBA

Ainge has another decision to make in the next couple of weeks at the NBA Draft, keep the No. 1 pick (if so, who to choose?) or move it? While the general consensus is to keep the pick and build for the immediate future and beyond, could trading Markelle Fultz (or the pick) to acquire a piece or two the Celtics could use to bridge the cap in the East now?

"This is what's difficult about our business that I think sometimes, you know, I don't think I knew this even when I was a player and maybe even when I coached as much as I do now," Ainge said. "As you look around the league, I think sometimes the mistakes that are made are when you're just that little bit, just that one piece away and you can't get that piece.

"Just because you're one piece away doesn't mean you can get it. And if you force yourself to get it and if you force a deal or force yourself to the second-best available or the third-or fourth-best available player at that position that you need, then it might not make you that much better or make you still not good enough, and you're stuck. We're not that far away, but we're still a ways away. We still know we need to get better. Everybody in our organization knows we need to get better. We need to add." [Boston Herald]

It will be an interesting summer, one would assume the Celtics should become a better team come next season. The bottom line, the only way Ainge see's that happening is making changes to improve his current roster


"We have a lot of good player," he said. "But we need some great ones." [Boston Herald]