Isaiah Thomas on Draymond Green's comments about Kelly Olynyk: 'Don't know how he can call anybody dirty' 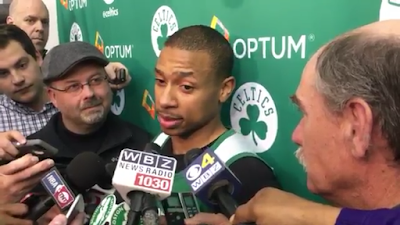 Green, who was suspended for Game 5 of the 2016 NBA Finals for kicking an opponent's genitalia one too many times, spoke about Olynyk's play against Kelly Oubre Jr. in Thursday's Game 3 in Washington on his Dray Day podcast.


"Kelly Olynyk is a dirty player, man," Green said. "He's dirty. Dirty player, man. I don't respect guys like that. I mean, I know he's not like the greatest basketball player in of all-time, so maybe you feel like you got to like do that, but you don't like -- just dirty. Like I don't respect that man, he dirty." [ESPN Boston]

Thomas called dismissed Green's claim, calling it "a joke" for him to make on his teammate.


"I don't know how he can call anybody dirty," Thomas said. "It is what it is. Everybody's got a comment or something to say. That's all it is.

Green took to Twitter to make a subtle jab towards Thomas.


Olynyk told the media after Tuesday's practice that Green is entitled to his opinion but he doesn't agree with the label and knows neither do his teammates.

Oubre Jr., who was suspended for Game 4 of the Eastern Conference semifinals series between the Celtics and Wizards, will return for Game 5 on Wednesday in Boston. Olynyk and the Celtics will look to grab a 3-2 lead while the Washington hopes to take that same lead back to their home court for Game 6.