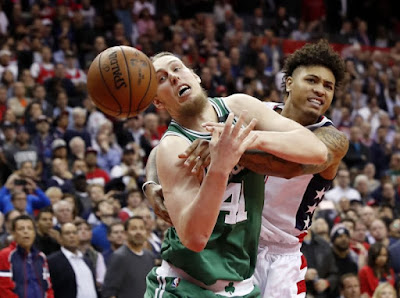 The Celtics and Wizards are all tied up 3-3 in this best-of-seven Eastern Conference semifinals series and we've all witnessed a fair share of drama so far over the last two weeks. So the NBA decided to add some more spice by releasing their now famous "Last Two Minute Report" acknowledging yet another error.

After John Wall's go ahead 3-pointer heard around the world, gave the Wizards a 92-91 lead with 3.5 seconds to go, plus a foul to give, Kelly Oubre fouled Celtics big man Kelly Olynyk on a inbound pass underneath the basket and the clock stopped at 1.7 seconds left in Game 6 on Friday night.

Isaiah Thomas' off balance long 3-point attempt with two Wizards covering him bounced off the rim to force a Game 7 back in Boston come Monday night.

However, according to the league's report, the foul on Olynyk should have stopped the clock a full second earlier than what actually occurred.


"The foul whistled with approximately 2.7 seconds on the clock but the clock runs to 1.7 seconds before stopping. The clock should have been stopped earlier automatically on the whistle or by the neutral clock operator."

The NBA also noted: "Instant replay is not permitted in this situation."

Celtics players did not mention of the possible error after the game or how it might of changed Isaiah Thomas' final shot attempt.

The report also states errors that effected both teams negatively including two incorrect calls involving Al Horford in the final minute of Game 6, a missed offensive foul that lead to Avery Bradley's go ahead 3-pointer that put the Celtics up 89-87 with 39 seconds left and a defensive 3-second violation.

Brad Stevens in the past as stated that he would prefer that the league not offer a review of the final minutes because nothing can be done to alter the outcome.