Ray Allen has no interest in responding to former Celtics teammates 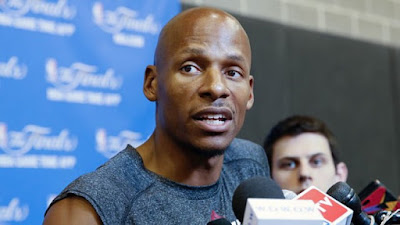 In classic Ray Allen fashion the all-time 3-point king has decided not respond to his former Boston Celtics teammates.

Monday night Paul Pierce, Rajon Rondo, Kendrick Perkins and Glen 'Big Baby' Davis appeared on Kevin Garnett's Area-21 on TNT. Members of the 2008 NBA championship team expressed how they felt about Allen taking his talents to South Beach to play for the Heat in the summer of 2012.

According the Sun Sentinel, the former two-time NBA champ knew he would be asked about the recent criticism, Allen requested through his publicist on Thursday at his Ray of Hope Foundation event in South Florida that there be no questions in regards to to this very topic


"Now, three days later, Allen had his opportunity to fire back, " wrote Ira Winderman of the Sun Sentinel. "Instead during a private moment he said he saw no reason or value in such a discourse, other than to affirm that a Facebook post seemingly cast in response to the TNT discussion was not of his doing, with the page in question no longer listed as his verified account." [NESN.com]

Allen was asked about his former Heat teammate Dwyane Wade and his future with the Chicago Bulls. Wade has a 23.8 million player option to return next season, but of course there has been some speculation that the 12-time All-Star could opt out and play elsewhere.

Wade could take less money to play with a potential contender, something Allen knows all too much about


"On thing I can always say, being a free agent in any situation, you've always got to go to your happiness. Because, at the end of the day, whatever the dollar figure is, it does have an impact on your decision, but I think at the end of the day, you have to choose where it is you're going to be happy and where you think you'll fit the most," said Allen.

He added: "82 games is a long time to be in some place where you may not be happy or may not feel like it fits. So I think for all of us, that's kind of the impetus behind our decision." [NESN.com]

Looks like Ray Allen's former Heat teammate Udonis Haslem has come to the defense of Ray Ray for what Paul Pierce, Kevin Garnett, Kendrick Perkins and Glen Davis had to say on Monday night. During an appearance on the Miami-based radio program; 'Jose Rose Show,' the Heat-lifer and three-time champ had this to say:


“I mean, they got to let that go. I think when you get to a point where you’re a free agent, you have the opportunity to make the best decision for you,” Haslem said. “Quality of life: Boston, Miami? Ahh, you guys can figure that one out. … I mean, and I understand, because at that time it was somewhat of a rivalry between us and Boston. But even when they had Ray we beat ’em. So it wasn’t like Ray came and helped us get over the edge.”

Haslem added: “It’s not like the year before with Ray they beat us. Put it this way, it wasn’t the similar situation to maybe Kevin Durant going to the team that beat him. It was, you got your ass whooped with Ray, and we got Ray and we whooped your ass again.” [HeatNation.com]

For the record, in 2013, on their way to a ring, the Heat and Celtics did not meet in the postseason. Should be interesting who else will come out of the woodwork and defend either side, stay tuned