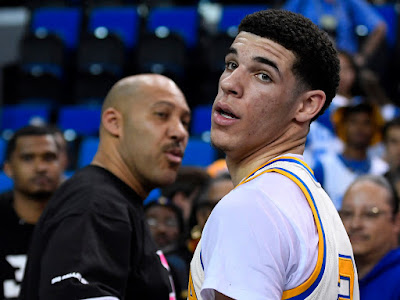 Boston Celtics president of basketball operations Danny Ainge confirmed on Thursday that Lonzo Ball's camp informed the C's that he will not work out with them before next month's NBA Draft.

Ainge spoke about Ball on his weekly appearance on CBS Sports Radio in Boston, about how the Celtics were eager to evaluate all the top-talent coming into the draft, especially since they own the No. 1 pick. Though not ideal in this situation, it wouldn't be the first time the C's have drafted a player who didn't work out for them (Paul Pierce is a perfect example and look how that turned out).


"We tried to get [Ball] in," Ainge said, while Boston's front-office staff traveled for a draft workout in New York that included Duke's Harry Giles and Kentucky's Malik Monk.

"We don't deal with [Ball's camp] all that much. They didn't show up at the combine, which is very common -- many of the top 10 or 15 players don't show up for the combine. ... We just tried to get him in for a workout and they politely said no." [ESPN]

While most mock drafts across the national sports media has Boston (barring any Draft Day trades) snagging Washington's guard Markelle Fultz at No. 1 come June, but Lonzo's father LarVal Ball has made it pretty clear the last two months or so, that he wants his son to be a Los Angeles Laker


"That's all we working out for is the Lakers," LaVar Ball told Lakers Nation earlier this month. "Just the Lakers. There's nobody else that we need to work out for." [ESPN]

During an appearance on a popular show on Fox Sports-1 last week, LaVar Ball explained his preference for Lonzo to play for the Lakers over the Celtics but said, ultimately, he'd be OK if Boston drafted his son too.


"If Lonzo goes to Boston, he turns into a 2. ... Lonzo's always going to be a point guard. He can play any position, but his true position is point guard and Boston has so many guards, you don't need that guy," LaVar Ball said.

Later he added: "Here's the thing: I prefer Zo to go to the Lakers, but if Boston were to choose him and Lonzo wants to play basketball, then guess what, he doesn't care where he goes."

Lonzo Ball's decision to not workout with the Celtics, who own the top overall pick, could mean the UCLA product could make less money when it comes to his rookie contract between the No.1 and No. 2 pick. The difference in guaranteed money is around $2,202,900 according to the league's current collective bargaining agreement.

At 13.3 percent, California has the highest state taxes in the U.S. when income tax brackets are considered, while Massachusetts' taxes are at 5.1 percent.

But even if LaVar is worried more about his son's 'Big Baller Brand' basketball shoe selling, we're sure he's well aware of the tax dollars and the discrepancies between the two states when it comes to Lonzo's paycheck right?