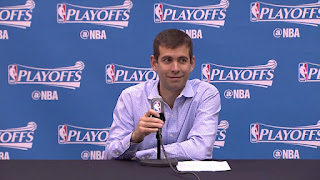 The Wizards played with a lot of effort in Game 3, they played harder than the Celtics and it was the best Brad Stevens has seen from Washington throughout their best-of-7 series.

When asked why the Wizards were able to get out to such a large lead in Thursday's 116-89 loss at the Verizon Center Stevens pointed to Washington's hustle while reminding the media that the C's are facing a very good team.


"They're just a really good, talented group, whether it's the first quarter, last quarter, whatever -- it's a group that has a lot of options," Stevens said. "They've tried to post us with a variety of guys. And then Gortat, you know, Gortat's a guy with his ability to play in seams as a passer but also roll to the rim or seal you up the lane and make lobs to the rim-- makes a lot of good plays for them. Very versatile, deep offensive lineup and then you know, I thought defensively the other night they were great."

Isaiah Thomas, who finished with 13 points in Game 3, credited the Wizards' defense in their double and triple teaming coverage as a catalyst to his poor scoring night. However, when Stevens was asked about how will the Celtics adjust in making sure Thomas gets better looks in Game 4, he said it was the effort by Washington that made the biggest difference. And if the Celtics want to head to Boston for Game 5 with a 3-1 lead, they're going to need to match that hustle.


"The thing that I saw that they did the other day -- obviously they put a lot of attention on Isaiah as every team that we play does but the thing I saw is they did it really hard," Stevens explained. "They were playing exceptionally hard and that's the deal. It's not how many guys, it's how hard those guys are playing and that's a credit to them. But Isaiah's played against doubles and triples and all that other stuff all year and we just all have to be better. And that's everybody on the roster, on the bench, on the coaching staff, we all have to do a better job of helping each other in those moments. Again, credit Washington. They played really well and they played really hard, much harder than we did."

The tension between these two teams boiled over in what was a technical-foul filled Game 3. There were eight technical fouls, and three ejections total. Wizards head coach Scott Brooks and Stevens were each handed a technical foul.

Physicality has certainly played a part in this series. But Stevens believes it's an important part of the game, according to him it's a trait that's within every good team. However, there is a line -- one that has been increasingly thinning throughout the series.

Is Stevens concerned that tensions will boil over again in Game 4?


"I think there's a certain physicality that you have to play with that all good teams play with and at the same time there's a line that can't be crossed," Stevens said. "That's not one guy. That's every guy on both teams. But no, I'm not worried about that from this standpoint."

After going with Gerald Green in starting lineup in Game 1 and 3, Stevens is going back to the starting five that got him a win in Game 2. Amir Johnson will get the nod in Game 4 alongside Al Horford and Jae Crowder in the front court with Avery Bradley and Thomas in the back.