Isaiah Thomas to miss the rest of playoffs with hip injury 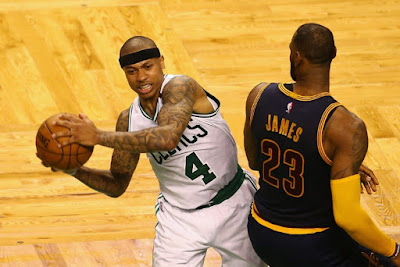 Already down 2-0 to the Cleveland Cavaliers, it seems things couldn't get any worse for the Celtics, especially after an historic blow out loss in Game 2, until the team announced late Saturday afternoon that Isaiah Thomas will miss the remainder of the postseason with a hip-injury.

According to team officials the All-Star point guard suffered a "re-aggravation of a right femoral-acetabular impingement with labral tear" during the Celtics 130-86 loss on Friday night.

Thomas initially injured his hip March 15 against Minnesota and missed the following two games. He aggravated the injury in Game 6 of the Eastern Conference semifinals against the Washington Wizards last week.

He missed all six of his shot attempts, scoring just two points, to go along with six assists in 17 minutes of action, before being shut down at halftime for what was being called a hip strain.


"I'm hurting," Thomas said. "I gave it everything I had. I'm suppose to be out there competing with my guys and I can't. That's the most frustrating part." [ESPN]

Thomas was already ruled out for Sunday's Game 3 before being further evaluated and did not travel with the team to Cleveland.


"Isaiah has worked tirelessly to manage this injury since it first occurred," Celtics team physician Dr. Brian McKeon said in a statement. "The swelling increased during the first two games against Cleveland, and in order to avoid more significant long-term damage to his hip, we could no longer allow him to continue." [ESPN]

Despite the Cavaliers leading 2-0 in this best-of-seven series and Boston not playing at a competitive level so far, Celtics team president Danny Ainge believes Thomas would not have returned at any point during the Eastern Conferance Finals, and the Celtics will know by next week if surgery is needed.

Thomas was shooting just 28-percent from the field through six quarters against the Cavaliers, while not exhibiting his usual explosiveness towards the basket, going 3-of-10 in the paint.

Before Thomas was ruled out for Game 3, Avery Bradley talked about how it would be a majar hole in Boston's offense it his teammate and friend would not be able to compete moving forward


"It's a blow," he said. "Isaiah brings a lot to this team, not just with his leadership but his play. Most important, I just hope he's better. I care about him off the floor. I just hope he's OK." [ESPN]

Thomas earned All-NBA second-team honors this week after averaging 28.9 points and 5.9 assists over 33.8 minutes per game during the regular season. His play led the Celtics to the best record in the Eastern Conference at 53-29

On the eve of Boston's playoff opener in April, Thomas' younger sister, Chyna died in a single-car accident in Washington. Thomas played through his grief and helped the Celtics overcome a 2-0 deficit to beat the Chicago Bulls in six games.

In Game 1 of a second-round series against the Wizards, Thomas lost a tooth and suffered additional dental damage while trying to defend Otto Porter Jr. Thomas underwent six hours of oral surgery during Boston's off day, then scored 53 points in an overtime victory in Game 2 on what would have been his sister's 23rd birthday.

Though Celtics coach Brad Stevens may have hinted after Boston's Game 6 win over the Wizards that Thomas was battling injuries, Thomas remained adamant that there were no excuses when it comes to the playoffs.

Ainge praised Thomas in a tweet Saturday, saying that the star guard had a "legendary season."


Legendary season by @Isaiah_Thomas 💪🏼With the personal tragedy and injuries he's overcome, getting through game 7 was heroic#thelittleguy
— Danny Ainge (@danielrainge) May 20, 2017