Isaiah Thomas has been rewarded after having one of the best individual seasons in Celtics history during the 2016-17 campaign. The two-time All-Star was named to the All-NBA Second Team on Thursday, marking it the first All-NBA nod of his career.

The Celtics guard cleared the Third-Team voting by a large margin as the next-highest vote receiver at the guard position was John Wall, who received 125 voting points.


“It’s a blessing,” Thomas said Thursday afternoon, moments after hearing the news. “It’s a blessing from God and from the Celtics for giving me the opportunity to be myself.

“And my teammates,” he added. “It’s not just something for me; it’s for this team. They allow me to be who I am, and they like me for who I am, so that says a lot about this team, this organization.” [Celtics.com] 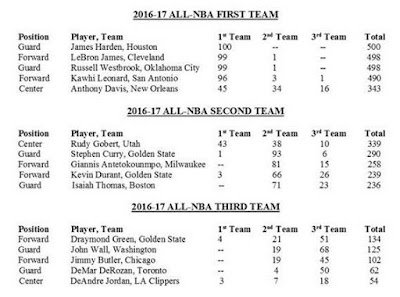 Thomas becomes the first Celtic to earn All-NBA honors since Rajon Rondo was named to the third team during the 2011-12 season. The last Celtic to get voted onto the All-NBA second team was Paul Pierce during the 2008-09 campaign.

Thomas finished third in the NBA in scoring this past regular season at 28.9 points per-game (46 percent from the field, 38 percent from behind the arc and 91 percent from the free throw line) the second highest in franchise history, behind Larry Bird's 1987-88 mark of 29.9 PPG.

Other team records Thomas set include with the most 3-pointers made (245) and he scored 20 or more points in 43 consecutive games.

From being the last pick (60th) in the 2011 NBA Draft to becoming the face of the leagues most storied franchise, Thomas last two season's in a Celtics jersey has been the difference maker, especially since he was suppose to be no more than a sixth man.


“I always knew I could do what I’m doing right now, but now it’s just proving to other people,” said Thomas. “I mean, it says a lot, but I want to be so much better. I’ve got so much room for improvement in so may areas. That (honor) was definitely a goal of mine and we got it.” [Celtics.com]

As the Celtics look to even up the score of Eastern Conference Finals against the Cleveland Cavaliers (1-0) when the series resume at the TD Garden on Friday night. For now Thomas will enjoy this honor for one day before it's back to business as usual.