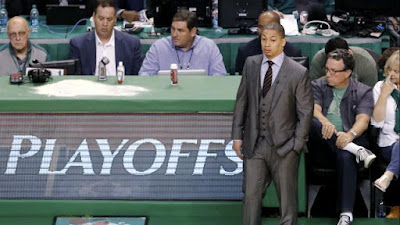 The Cleveland Cavaliers find themselves one win away from a third straight trip to the NBA Finals and another showdown with the Golden State Warriors after a comeback win in Game 4 over the Celtics. The series is now 3-1 heading back to Boston and the TD Garden for a potential close out game.

But don't ask coach Tyronn Lue if he's already looking ahead to the Finals and the Warriors just yet. In fact the Cavs head coach still has his hands full trying to game plan for the Isaiah Thomas-less Boston Celtics.

Lue told reporters on Wednesday that Cleveland's original plan was built on frustrating Isaiah Thomas on offense and exploiting him on defense, but since the Celtics lost their All-Star point guard to a season-ending hip injury in Game 2, Boston has become almost impossible to scheme against.


“The stuff they’re running, it’s harder to defend than Golden State’s [offense] for me, as far as the actions and all the running around and all the guys who are making all the plays, so it’s a totally different thing," said Lue. “Like, they hit the post, Golden State runs splits and all that stuff but these guys are running all kinds of [s**t]. Brad’s [Stevens] got them moving and cutting and playing with pace and everybody is a threat.” [ESPN]

That's right, the 53-win Celtics, without Isaiah Thomas, are harder to guard than the 67-win Golden State Warriors according to Tyronn Lue.

Despite Lue and the Cavaliers losing in Game 3 to the Celtics and being down by as much as 16 points in Game 4, Cleveland has learned a valuable lesson by not taking Boston lightly, especially without their leader, Thomas in the lineup. Anyone in the C's offense can catch fire, such was the case for Marcus Smart on Sunday, and Avery Bradley last night.

The Cavalier's coach was asked if he's thinking at all about the Warriors now that the Cavaliers are up 3-1, with a chance to wrap up the series against the Celtics in Game 5


"I don't even think about them," Lue said of the Warriors to a small group of Cleveland beat writers following the Cavs' Game 4 win Tuesday. "You can't. As much as you want to, it's not over. We're just focused on Boston." [NBA.com]

Game 5 tips-off from the TD Garden Thursday night on TNT, beginning at 8:30