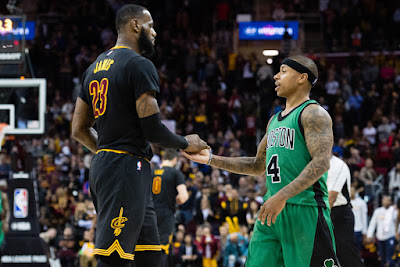 Has any team in NBA history enjoyed a three-day span the way the Celtics have?

After beating the Washington Wizards in Game 7 of the Eastern Conference Semi-Finals on Monday, they landed the No. 1 pick on Tuesday's NBA Draft Lottery.

Now tonight Boston will host Game 1 of the Conference Finals (first time since 2012) against LeBron James and the Cleveland Cavaliers.

"It was just like, 'Wow,'" said LeBron James on the Celtics being in the Eastern Conference Finals and winning the NBA Lottery in the same week. "Just like, 'OK.' To be able to be a very, very good team and get the number one pick, they got the better side of that situation with Brooklyn. I'll tell you that." [ESPN]

The Cavaliers are 8-0 in this postseason, but the Celtics are the favorites to win Game 1 at the TD Garden, according to ESPN's BPI. But Cleveland still owns a 55 percent chance to win the series, based on the same report.

The Celtics aren't foolish enough to believe that if the odds are in their favor for one game, it doesn't change the fact that no basketball analyst has them beating the reigning NBA champs four times.


"Did you hear anybody pick us to win last series, either?" Celtics forward Jae Crowder asked a reporter after Tuesday's workout at the team's practice facility. "What about the one before that?"

Added Crowder: "We love it. Typical. It's part of it. We don't listen to that stuff. We just go out and play. People are going to say what they want to say, but we just play." [ESPN]

For the last three years the Celtics core has been used to being an underdog, while wearing it like a badge of honor, and it motivates them to prove those nay-sayers wrong one battle at a time. It also helps when each teammate has a chip on their shoulder for one reason or another, especially when they seem to be counted out.


"Everybody in the locker room really welcomes it with open arms, explained Crowder. "It's part of what we're about. Everybody in this locker room has been doubted at some point in their career. And we just use it as motivation. That's all you can do."

Despite some Celtics fan being satisfied with the notion of not getting sweep by winning at least one game, Isaiah Thomas dismissed that idea.


"That's their opinion," said Thomas. "We've been counted out since I've been here, so it's nothing new."

When asked if this is used to fuel some motivation, Thomas added, "It helps a little bit but, at the same time, we're so focused on what's going on. This group of guys we have, we're not really focused on the outside noise and what they think we're going to do. First couple rounds, they didn't think we were going to get past that so we're not really worried about what others are thinking. We're just going to take care of business." [ESPN]

Al Horford was asked to respond to a TV reporter, when he was told "literally no one is picking you guys to win."


"Everybody is always going to roll with the champ until somebody beats them, right? Horford responded. "That's just the way it is." [ESPN]

Avery Bradley added: "People have been saying stuff about us since the first [round]. We were down 0-2 and you heard everyone talking stuff about us, but I mean, it's part of the game," said Bradley. "We understand that we only can worry about us and what we can control, and that's our effort, and that's all we care about. We don't care about what anyone else thinks." [ESPN]

Celtics take on the Cavaliers from the Garden tonight in Game 1 of the Eastern Finals at 8:30 on TNT