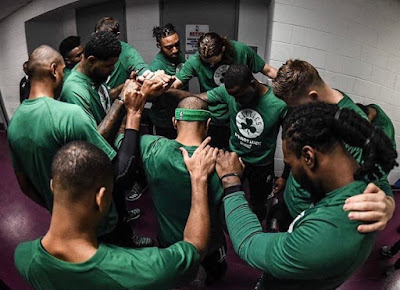 As the Celtics playoff run concluded on Thursday night against the Cleveland Cavaliers and exit interviews were conducted on Friday afternoon, the offseason is officially underway for Danny Ainge. Here are some decisions that the C's president of basketball operations will have to consider at some point this summer

Zeller has been a nice player for Boston since arriving in a one sided deal with the Cavaliers three summers ago but his lack of growth into anything more than a depth big man has left the benefit of having an additional roster spot and cap room being a bigger plus than keeping him.

2. How to spend cap space
Verdict: Less is more.

To clarify, spend more on less players and let the 'you get what you pay for' quote ring true. In order to do this Boston will need to let all of it's 2016-17 free agents walk and wait on signing any of it's foreign draft rights until the dust settles. Boston should be the most appealing free agent destination in the summer of 2017 which means it will likely court any player it desires including the likes of Clipper forward Blake Griffin, Jazz swingman Gordon Hayward, or even some lower tier options like Hawks forward Paul Millsap, Raptors forward Serge Ibaka, and Bucks castoff Greg Monroe. Boston will have its sights on Hayward and Griffin but if all else fails they need to look to sign a player who will instantly make them better regardless of age.

Once that player is landed, the Celtics need to make extending Isaiah Thomas the priority. The universal fear with the addition of a 'max' caliber player and extending Thomas will be the dissolving of any cap space going forward. The anticipated value of doing such a thing would be closing in on $60 million annually, making an extension with Avery Bradley or Marcus Smart highly unlikely… but less is more.

3. What to do with Ante Zizic, Guershon Yabusele, and Abdul Nader
Verdict: Let the Yabu and Zizic show begin.

The two players should be signing for about a combined $5 million a year and if even one of them can become a solid rotational player in year one, Boston will have struck gold. The other will need to battle against Jordan Mickey for the remaining minutes (assuming Boston signs a max-player and extends Isaiah Thomas this summer) and will have a shot to get into the rotation all season. Needless to say, expect those two to play a major role in the Celtics depth under the basket in 2017-18.

On the other hand, Nader will have an uphill battle to make the team. If he can show something that Brad Stevens can use, it is possible he makes it as one of 15 on this team.

4. What guard should be traded to open playing time for Markelle Fultz (or whomever is picked at No. 1)
Verdict: Send Marcus Smart to Philadelphia for Jahlil Okafor.

While many will bemoan the idea of trading the hyper competitor Smart for the polar opposite in Okafor, Boston is in dire straits for players who can score and rebound and potentially have a log-jam in the backcourt. The deal would be sour at first but they would be adding the needed height of Okafor and a low-post scorer who would provide a different option to the Celtics offensive arsenal in 2017-18.

The additional silver lining to this deal would be the avoidance of extending Smart and running the club even further into the luxury tax (which is seemingly unavoidable if they extend Thomas and added another max salary player). Smart's defense and grit would be missed but moving away from the 24-year old guard might be the best option long term for both parties.

Thomas is by far the most valuable of the trio and could be in line to be extended this summer to avoid any snafus at the close of next season. Thomas will be a major part of the team until the end of the deal but it has become a majority consensus that he is worth the money and can help bring this Celtics team to the next level.

As mentioned above, Smart seems to be the logical trade bait this summer. With his lack of offensive growth and the jam in backcourt depth, Boston will need to make a move on one of its guards and with pending free agency in view, a move to trade Smart makes the most sense.

Bradley is the most interesting of the group. Many will say he is a trade worthy candidate with his injury history and anticipated asking price on his new deal but this past season should prove that Bradley may be the team’s second most important player as currently instituted. His defensive prowess at both guard spots cannot be understated along with his ability to stick open shots (something Smart has not been able to do consistently). Since it is highly likely Boston will be going into the luxury tax in the coming years, why not add another quality player instead of the bargain?

6. Re-signing of any of your own potential free agents
Verdict: Easy as you go.

Boston has no reason to return Green with the selection and growth of Jaylen Brown. In order to get him more adequate playing time they will need to let the vet find a new home.

Jerebko has been a great spark off the bench the last couple of seasons but with the anticipated arrival of Guershon Yabusele his minutes would likely evaporate along with the drastic price difference between the two.

Which brings us to the more difficult of the decisions; Amir Johnson and Kelly Olynyk.

Johnson has been a consistent player for Boston since signing as a free agent in the summer of 2015. His ability to do the dirty work and be a role player in the Celtics system has endeared him to the team and fans alike. While the replacement for his role might be fairly easy, his locker room presence and leadership will be a missed come the start of next season. Unfortunately, even the loss of that leadership isn’t enough to return the player. If the Celtics can add the pieces they are expected to, they would need to go even further into luxury tax territory to have the big man return and it just doesn’t seem like the right kind of move when financially, Boston will already be in rough shape.

Lastly, Olynyk, the first pick of the Brad Stevens era has been an average one to say the least. The former Gonzaga big man has had numerous injury issues to go with a total lack of consistency on both ends of the floor in his four years with the Celtics. Olynyk still has good value as a rotational scoring big man but the price on K.O. will likely be a little too rich for the Celtics' blood. Olynyk will have a shot at growing into a fine player on another NBA squad but sadly it doesn’t make a ton of sense for Boston to break the bank for a player like Kelly.

7. How much over the luxury tax are the Celtics willing to go?
Verdict: Proceed with caution.

If Boston decides to move forward with taking the the No. 1 pick, signing a top free agent, and extending Thomas they are in 'cap jail' until the end of Al Horford’s max deal three years from now. While that doesn’t seem like a big deal now, the Celtics will have to figure out how to add a potential top-5 pick from the 2018 draft to the mix and that’s not mentioning Avery Bradley or Marcus Smart as pending free agents… not as easy as it seems.