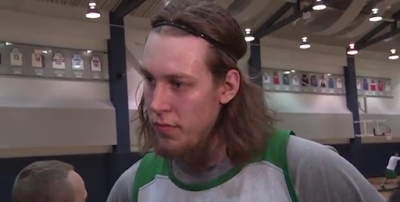 After the NBA handed down a one-game suspension to Kelly Oubre Jr. for his Flagrant-2 foul on Kelly Olynyk, most of the Celtics players weren't surprised by the decision but admitted they had other things on their minds.

Although Isaiah Thomas agrees with the league's decision to suspend Oubre Jr. for Game 4, he says Washington's back up forward is the least of his worries.


"He should be suspended. If you do that, that should be automatic," Thomas said. "We're not really worried about him or what they're doing. We're worried about Celtics right now."

With the chance of grabbing a commanding 3-1 lead in their best-of-7 series, the Celtics know how pivotal Game 4 will be on Sunday. Coach Brad Stevens replied, "no reaction" when asked about the suspension and said it doesn't matter to him who's playing for the Wizards, it's his team that needs to play better on Sunday.


"We've got to play better than we did the other day," Stevens said. "Regardless of who's playing."

Stevens also gave credit to Olynyk for keeping his cool after he was shoved to the ground by Oubre Jr. and said the same about both teams that were involved in the scuffle.

After Game 3, Oubre Jr. claimed that Olynyk's hard screen before the altercation wasn't the first time he took a hard hit from Olynyk. Oubre Jr. accused Olynyk of giving him hits to the head throughout the series, which he says led to his retaliation in the second quarter.

This is the second time in the last three seasons Olynyk has drawn a playoff suspension. In 2015, Olynyk was suspended for injuring Kevin Love in the opening round series against the Cavaliers.

Click the video below to see more of what Stevens and the Celtics had to say after Saturday's practice at Georgetown University.